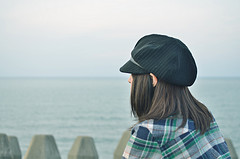 According to Gallup, recent polling shows that 13% of adults in the world, about 640 million, want to move to another country and stay there permanently. The country that they’d most like to move to is the US, with around 150 million wanting to go there. But that doesn’t mean that most will be moving any time soon, as earlier figures show that only 8% of those wanting to migrate plan to do so in the next year, and only 35% of that number are actually taking steps (applying for visas, buying tickets, etc.) to leave.

On the one hand, there’s the greener grass on the other side of the fence; on the other, there’s the emotional toll of leaving home. Susan Matt, professor of history at Weber State University and author of Homesickness: An American History, writes about changing countries:

It leads to opportunity and profits, but it also has high psychological costs. In nearly a decade’s research into the emotions and experiences of immigrants and migrants, I’ve discovered that many people who leave home in search of better prospects end up feeling displaced and depressed. Few speak openly of the substantial pain of leaving home.

Even though technology has done much to bridge the gap across the miles, it doesn’t eliminate homesickness. From 2002 to 2009, the percentage of immigrants in the US who called home at least once a week rose from 28 to 66, but all the phones, Facebook, email, and Skype in the world won’t stop the feelings of loss. Over the last nine years, the number of immigrants has dropped who say that they’re “extremely happy” or that they’d make the same move if they had to do it all over again. One study shows that Mexican immigrants in the US have a 40% higher rate of depression and anxiety than their relatives who stayed in Mexico. María Elena Rivera, a psychologist in Tepic, Mexico, believes that the increased ability to “phone home” can actually worsen homesickness, as the immigrants get constant reminders of what they are missing.

Matt’s point is not that changing countries represents a bad decision. Rather it’s that we romanticize it to the point that the sadness it often brings comes as an unexpected shock. We think that we’ve moved beyond a natural longing for home, but we haven’t.

The persistence of homesickness points to the limitations of the cosmopolitan philosophy that undergirds so much of our market and society. The idea that we can and should feel at home anyplace on the globe is based on a worldview that celebrates the solitary, mobile individual and envisions men and women as easily separated from family, from home and from the past. But this vision doesn’t square with our emotions, for our ties to home, although often underestimated, are strong and enduring.

We need to talk about homesickness more. It’s real, and advances in technology and changes in worldview won’t make it go away. If immigrants are going to be healthy in their new surroundings, then it will help for them to go in with eyes wide open and with realistic expectations. It is true: “Forewarned is forearmed.” Continuing the conversation isn’t easy, but it’s necessary. “Today, explicit discussions of homesickness are rare,” writes Matt, “for the emotion is typically regarded as an embarrassing impediment to individual progress and prosperity. This silence makes mobility appear deceptively easy.”

[photo: “She Stared at the Sea,” by Maaco, used under a Creative Commons license]

You are currently reading Homesick Immigrants at Clearing Customs.