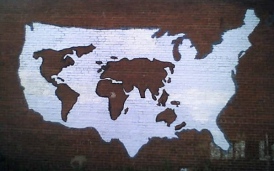 For many, strongman J. D. “The Ice Man” Anderson put Noel, Missouri, on the map. Leading up to his quarterfinals performance on America’s Got Talent this week, he talked about how the people in his hometown “wouldn’t even fill up the balcony at Radio City Music Hall.” He then went on to snap baseball bats in two, smash cinder blocks, and run headlong into blocks of ice.

Ask your grandparents and they might remember Noel’s heyday as a place to send holiday mail for its “Christmas City” postmark. With the help of singer Kate Smith telling the “Noel Story” on the radio in the 40s and 50s, more than half a million pieces of mail passed through Noel each year in the days leading up to Christmas.

Noel’s high point as “Christmas City” is probably behind it (the high point for mailing Christmas cards anywhere is probably in the past), and Anderson didn’t make it to the semifinals of America’s Got Talent.

But that doesn’t mean Noel’s time in the spotlight is gone. In fact, the small Ozark town can now stake a claim as an international city, with more per-capita cultural diversity than most metropolises hundreds of times its size.

The Joplin Globe reports that it all started when the Hudson Foods chicken plant in Noel recruited Hispanic workers from along the US-Mexican border. After Tyson bought the plant in 1998, more and more immigrants arrived, including refugees from Africa. Today, nearly two-thirds of the plants 1,500 workers are “minorities,” representing such places as Mexico, Somalia, Sudan, Micronesia, Kenya, Laos, Myanmar, and Ethiopia.

But the influx of immigrant workers to this town of 1,800 hasn’t always gone smoothly. A 2002 article in The Kansas City Star focuses on the difficulties—the graffiti, the stares, the shouted slurs. James Carroll, mayor of Noel, tells The Globe that when the Somalis came to town, a Mexican resident said to him, “I now know how you felt when we came here.”

According to a broadcast from Harvest Public Media, which was aired by NPR, in August of last year the tires on more than a dozen cars owned by Somalis were slashed. And Somali workers say they don’t feel welcome at Kathy’s Kountry Kitchen on Main Street, where servers wear t-shirts that say, “I got caught eating at the KKK.”

While it’s clear that some in the Noel community wish the immigrants and refugees hadn’t come, there are also many in Noel open to the changes and helpful to the new arrivals.

“If you want to know what America is,” Angie Brewer tells Harvest Public Media, “come sit in front of the feed store and watch people go by in a turban, in an island skirt and in their overalls, and they’re all just going to work.” Brewer is principal at Noel Elementary, where about 11 languages are spoken by the school’s 400 students. She says that the schools are the “government agency in town.” “People come here if they need shoes, if they need clothes, if they’re hungry. We send 37 backpacks home every weekend with kids that just don’t have enough food.”

The schools play a big part in the lives of the immigrant children because of the opportunities that education provides. This is a theme that we hear in comments, recorded by Harvest Public Media, of the children of the immigrant workers:

Soe Soe, 18, from Myanmar, grew up in refugee camp in Thailand. Instead of going to high school, he works at the plant to support his family, taking English classes in Noel offered by Crowder College. “I have problem,” he says. “I cannot speak English. I think one day, when my sister already 18, I can go school. She say, ‘Don’t worry my brother. I gonna support you.'”

Eighteen-year-old Oscar is from Mexico. He came to Noel with his mother when he was two and was a senior in high school at the time of the interview. “Right after high school, I will be going to college. I will be the first of my family to go to college. That’s what motivates me, right now, to finish high school.”