From Film House to Ghost House: 8 Former Embassies around the World 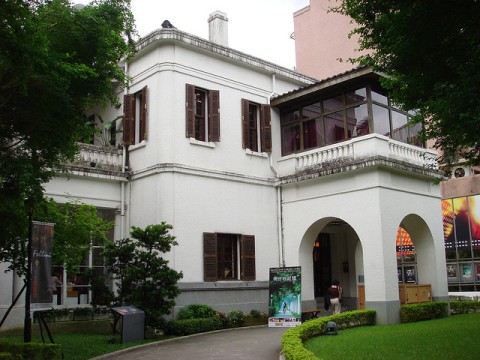 The latest issue of Travel and Leisure includes a “Definitive Guide to Taipei.” I guess I’m a little out of touch with the magazine’s regular readership, because I lived in Taipei for 10 years and I’ve only been to one of the hot spots that they listed. I’m not talking about the general areas. I’ve been to Daan, I just haven’t sipped tea at Cha Cha Thé. And I’ve spent time at Beitou, but I’ve never experienced the hot-spring spas at Villa 32.

One place I have been, though, was mentioned as a favorite by one of their “insiders.” Designer Chrystal Wang tells readers,

Catch a movie at Spot, a colonial-style mansion turned theater that shows indie and art-house films. The charming café next door is the perfect place for afternoon tea.

While Wang’s description is accurate, it’s somewhat incomplete. The building us much more than just “a colonial-style mansion.” It’s the former US embassy.

Built in the 1920s by the occupying Japanese, the building housed ambassadors until being closed in 1979, when the US severed diplomatic ties with Taiwan. Then, after being abandoned for nearly 20 years, the renovated structure reopened in 2002. Now the ambassador’s garage has become an 88-seat movie theater; the coat room is a gift shop; and the reception room is the C25 Coffee Shop.

The embassy in Taiwan is not the only one that has been given a new identity. Many structures around the globe have shed their diplomatic functions and have taken on new roles.

The US embassy in Tehran

The site of the hostage crisis that began in 1979. The building is now an anti-US-themed museum.

The French Embassy in Tokyo

Scheduled for demolition in 2010, the former French embassy to Japan opened its doors to nearly 100 French and Japanese artists for a giant art exhibit, entitled “No Man’s Land.” Arstcape Japan reports that the installations included one room with every surface covered in clay, “manga-inspired paintings that juxtapose Japanese ultranationalist and grotesque horrorshow motifs,” and “surreal photos of hermit crabs.”

The Iraqi Embassy in Berlin

Abandoned since 1990 when East Germany became no more, the “Ghost Embassy” is open for anyone to wander through. The United Arab Emirates’ newspaper The National, reports that the rooms of the crumbling building are littered with broken glass and abandoned files. Owned by Germany but leased perpetually to Iraq, the property seems to belong to no one. Desolate and available, the embassy became the setting for a music video made by Irish composer Eutechnik (Brian Smith).

The Somali Embassy in Rome

In 2011, the dilapidated building was home to over 100 Somali refugees waiting to receive asylum status. The compound has been abandoned since the Somali government collapsed in the 1990s. “Rats are our neighbors,” Mohammed, one of the refugees, tells Radio Netherlands Worldwide. “No, our friend,” says Ibrahim.

The Italian Embassy in Washington, D.C.

The Neo-Renaissance building is going to get an 8-story addition and will hold over 100 upscale condos. The Washington Post quotes the zoning commission as calling the finished product “a modernist ‘hyphen’ connecting the old with the new.” It will include six residences set aside at “affordable” rates for people who earn 80% or less of D.C.’s median income.

The Canadian High Commission in London

In 1961 the Canadian diplomatic mission moved into the former US embassy on Grosvenor Square, in London, naming it MacDonald House. The Canadians have since left, and last year, the Indian Lodha Group bought the seven-storey building for over half a billion dollars. Of the location, Abhishek Lodha, the group’s managing director, tells The Guardian, “1 Grosvenor Square is the best address in the world and we will create a world-class development which befits the status of this address.” The newspaper calls the planned residential project “another super-luxe enclave for the world’s super-rich.”

The Chinese embassy in Washington, D.C.

If you’re in the market for a move-in ready space that’s cat friendly, here are some of the salient points from an ad for the Historic Chinese Embassy Luxury Condos on 19th Street in D.C.

[photo: “The Spot aka the Taiwan Film House,” by ctsnow, used under a Creative Commons license]

§ 2 Responses to From Film House to Ghost House: 8 Former Embassies around the World

You are currently reading From Film House to Ghost House: 8 Former Embassies around the World at Clearing Customs.