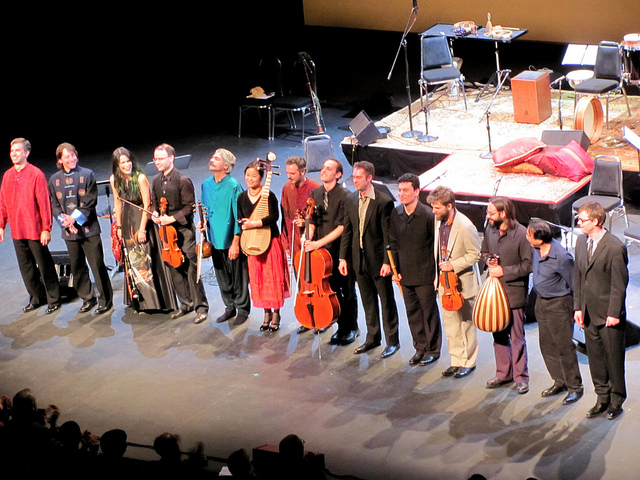 “Since the very beginning,” Grammy-winning cellist Yo-Yo Ma tells his Facebook audience, “the Silk Road Ensemble has been about departure and explorations, new encounters and homecomings.”

Ma was born in Paris to Chinese parents, moving to New York at the age of seven. The Silk Road Ensemble, a collective of musicians and composers from over 20 countries, was born in 2000, under Ma’s direction.

A documentary on Ma and the group, The Music of Strangers: Yo-Yo Ma and the Silk Road Ensemble, had its US premier at the True/False Film Festival two weeks ago in Columbia, Missouri. Since most of us will never see the film, I’ve put together several videos to give a glimpse of what we’re missing.

The first is a trailer for The Music of Strangers. “Everybody is afraid, but you make a connection with another human being, you can turn fear to joy”— Yo-Yo Ma. (Edit: I added this video to the post after the trailer came out on March 24.)

This one is an intro from the Berlinale (Berlin International Film Festival), including a clip of the young Ma and his eleven-year-old sister performing on television for President Kennedy. Leonard Bernstein introduced him by saying, “Now here’s a cultural image for you to ponder as you listen: a seven-year-old Chinese cellist playing old French music for his new American compatriots.”

In the next video, Ma describes the ensemble, saying that its members see the alignment between classical and world music: “I think it’s a way of thinking about, again, who we are, who we would like to be, how we want to fit in a larger world.”

Here is another trailer for The Music of Strangers, featuring Cristina Pato from Spain, a pop star in her home country and holder of a PhD in music. She is an accomplished player of the gaita, a traditional bagpipe from Spain’s Galician region.

This one is the trailer for an earlier documentary The Silk Road Ensemble with Yo-Yo Ma “Tanglewood Revisited.” In it, you can hear Pato’s gaita, and she says, “We are very lucky because we do some kind of art that it doesn’t need words.”

In this video, the Silk Road Ensemble is at the Kennedy Center, playing the traditional Persian folk tune, “Ascending Bird.”

Here is a performance of “Rustem,” a Roma song from Romania.

And finally, this is North Carolinian Rhiannon Giddens joining the Ensemble to sing “St. James Infirmary Blues,” from their album Sing Me Home.  Ma says,

Each piece on Sing Me Home invites listeners to explore the “music of home” through the individual experiences of Ensemble members, many of whom are immigrants. The result is a compelling collection of innovative and deeply moving tributes to the rich cultural heritage of the Balkans, China, Galicia, India, Iran, Ireland, Japan, Mali, people of the Roma, Syria, and the United States.
(“New Album: Sing Me Home” February 22, 2016)

2 thoughts on “Yo-Yo Ma: Putting Together Sounds from the Silk Road”