The Serendipity of Juggling 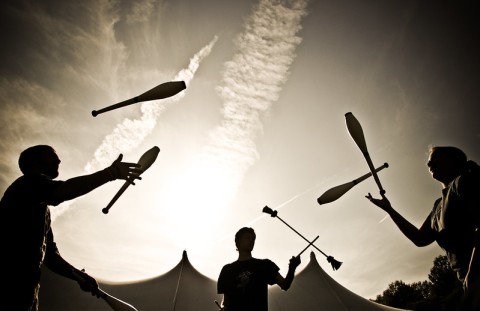 Entertainer Michael Davis used to begin his act with this line: “They say a comic says funny things, but a comedian says things funny. This makes me a juggler.”

Truth is, we’re all jugglers of some sort, trying to balance multiple roles in life, keeping all the plates spinning and the balls in the air. That’s the way it’s always been, and, I’m sure, always will be.

But when it comes to the pastime (or career) of juggling, things have changed over time, as pointed out in this TEDx Talk by Jay Gilligan:

Gilligan, who’s juggled for 28 years, tells (and shows) the differences between American/Western juggling—with its symmetry and repetition—and Scandanavian/European juggling—which features asymmetry and lots of starts and stops.

From there he goes on to talk about the origins of juggling rings. Have you

ever wondered why juggling rings are the size they are? Giligan has. And he found the answer from his friend and fellow juggler, Dave Finnigan. In 1976, Finnigan, also known as Professor Confidence, wanted to find a place in Asia for making juggling props, so he visited a plastic fabrication factory in Taiwan. While describing the rings to the factory owner, Mr. Tsai, he grabbed a cookie tin from Mr. Tsai’s desk. He drew a circle around it and then used “another round item” to draw a smaller circle inside. This became their template. The cookie tin happened to be about 13 inches across.

Juggler and juggling historian David Cain adds to the story, locating the factory in the south-Taiwan city of Tainan and writing that the original rings were later fine tuned by expanding the hole inside. He quotes Finnigan as saying, “When jugglers complained that the ring would not easily fit over their heads, we came up with the white ring the next year, so it would fit over the head of the jugglers.”

Speaking of innovation, juggler Michael Moschen is so innovative that in 1990 he was named a MacArthur Fellow, receiving a “genius grant” from the  foundation. In the early TED Talk below, Moschen shows off his creativity and delves into what I would call the “philosophy” of juggling. At 19:24, he juggles inside a triangle, and at 25:50 he uses a single ball to give a short introduction to “contact juggling,” which became one of his specialties.

If you’re not completely sure what contact juggling is, let’s go back to Taiwan and watch Zheng Jhe demonstrate his skills. Relax and enjoy.

You are currently reading The Serendipity of Juggling at Clearing Customs.