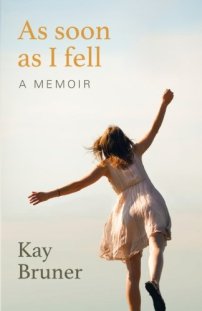 I have two new friends I’d like to introduce you to. Their names are Andy and Kay Bruner.

I first met up with Andy not long ago through email when he helped me with some of the technical details of writing for A Life Overseas. Then, a few weeks later, I got to know his wife, Kay—and got to know Andy better—by reading her memoir As Soon as I Fell.

I’m not usually a fast reader, but I started her book in the afternoon after work, kept going until I fell asleep that night, and grabbed it off my nightstand and finished it when I woke up in the morning.

It’s a fun read, as Kay tells how her family of four (in time, growing to six) moved to Papua New Guinea to learn about village life. Then they relocated to the Solomon Islands, where she and Andy worked to translate the Bible.

On their first trip to their new home in the Solomon Islands, Andy went ahead on a cargo ship, while Kay and their young daughter and son made their way on the torpedo-shaped Ocean Express, a boat that rolled violently in rough seas. After someone gave the children hard-boiled eggs to eat, and the waves grew larger in open water, Kay writes that she made her “first ship-travel resolution.”

This was not the only stomach-churning adventure that they had. In fact, throwing up is something of a common theme in Kay’s writing. As I read through the book, I thought of playing a drinking game, taking a swig (of Maalox, of course) every time someone lost her lunch. The nausea seemed to reach its apex when Kay was pregnant with their third child. While describing the intricacies of prenatal care in an island town, she says that she “was sick as [she] never knew it was possible to be sick.” “The smell of the kitchen cabinets made me throw up,” she writes. “For the next four months, I threw up. Throwing up was my life.”

As Soon as I Fell is also a challenging read. Kay writes candidly about the times when the difficulties were no longer humorous, when reaching a breaking point was not a concern but a reality. She tells how her upbringing had led her to strive for perfection, and when that wasn’t possible, to “perform at any cost.” This was part of what led her to mission work, but it was also what led her to a place where she couldn’t continue any more.

In the middle section of the book, she shares journal entries, giving more day-to-day details of their lives as Bible translators.

Then, returning to a more reflective style of writing, she introduces the book’s third section with

This time, the nausea was worse than seasickness. Kay had already written about the strains on her marriage with Andy, fueled by the unhealthy ways each dealt with stress. Now she had discovered that her husband was addicted to pornography.

My heart breaks for what the two of them went through.

There were the struggles that caused them to leave the field. There was the leaving itself. And there was the difficult task of returning to the leadership of their mission organization and life in the States.

While you can read Kay’s perspective of their experiences in As Soon as I Fell, Andy is open to sharing about it as well. In his blog post “Want to See What a Porn-Addicted Missionary Looks Like?” he tells of the prevalence of pornography among Christians and discusses ways to confront the issue. One is to open up conversations about pornography so that those who need help will be willing to ask for it.

Of his addiction, I would have to paraphrase the English chaplain John Bradford: “But for the grace of God, there goes Craig Thompson.”

After returning to the States, the Bruners began attending a new church. Kay spoke to a pastor there whom she’d not met before. “I wanted to tell him a little of my story,” she writes, “but all I could say was, ‘I’m a missionary,’ before I started sobbing.” That brought tears to my eyes, too.

I am so glad that Kay was able to tell more of her story in As Soon as I Fell. I’m so glad for her honesty and that of her husband. I’m so glad I have two new friends.

Now I hope to meet them some day.

2 thoughts on ““As Soon as I Fell”: Tumbling off the Missionary Pedestal”