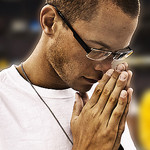 In 2010, The Pew Forum on Religion and Public Life conducted a phone survey of over 3,000 Americans, asking them factual questions on a variety of topics, including religion. Eleven of those questions dealt with “world religions other than Christianity.”

Answers were tracked by the religion of those surveyed, showing that the group with the highest score on the world-religions questions were Jewish (with 7.9 correct answers), followed by Atheist/Agnostic (7.5) and Mormon (5.6). Catholics as a whole answered 4.7 questions correctly, while Protestants were right on 4.6.

To see how you compare, take a look at the 11 questions below. Do not click on the answer you choose (that will simply reload this page). Rather, hover your pointer over your selection and wait for the verdict to appear. Hovering over the correct answer will also show the percentage of participants in the original survey who answered correctly.

[photo: “The Prayer,” by Connor Tarter, used under a Creative Commons license]