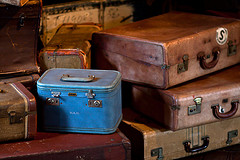 USA Today reports that 2012 marks the 25th anniversary of the Rollaboard suitcase. After seeing passengers struggling with their luggage, wheeled trolleys, and bungee cords, Bob Plath, a pilot at Northwest Airlines came up with the idea to create a suitcase with a built-in handle and wheels.

Now, two and a half decades later, two new inventors have come up with a product that they hope will change traveling again. The creators are Darryl Lenz, a flight attendant, and her husband, Randy. After they watched parents struggling with their luggage, strollers, and children, they designed a chair that straps on to your wheeled luggage. It’s called the “Ride-On Carry-On.”

We first saw this product on ABC’s Shark Tank, where the Lenzes won backing from investor Barbara Corcoran. Since then, they’ve been featured on several TV shows, including The View, Good Morning America, and Inside Edition. Clips from these shows are available on the Ride-On Carry-On website, but my favorite is this one. Not only does it introduce the product, but it also has that great YOU’VE GOT TO HAVE ONE! infomercial style.

So what are you waiting for? ORDER YOURS TODAY! (Luggage not included.)

But then again, maybe you don’t have kids young enough to ride on your carry-on. Or maybe you’re just not sold on the idea. You’re probably not alone. It’s not easy being an early adapter.

In fact, there’s at least one person who still isn’t a fan of the Rollaboard-style carry-on. Richard Bangs, host of American Public Television’s Richard Bangs’ Adventures with Purpose, tells USA Today that the Rollaboard marked “the beginning of human devolution.” According to Bangs,

It used to be, as we ran through airports carrying our bags,  there was a measure of physical exertion that countered, to a degree, the hours spent motionless in an airline seat. It toned muscles and prepared us for the adventure ahead.

Regardless, the evolution of the suitcase continues. When USA Today asked what’s “next on the horizon,” Michele Marini Pittenger, president of the Travel Goods Association, said, “Luggage that packs itself? Now that would be a problem-solver.”

While that’s probably not going to happen soon, what about luggage that moves itself?

Cutting-edge travelers, I present you hop! “the following suitcase.” Hop! is the brain child of Rodrigo Garcia Gonzalez, a designer who has studied in Canada, India, Chile, Spain, and Sweden. (Hmmm. . . . I wonder if one of these could work with a Roll-On Carry-On. . . .)