As I was finishing up writing about China’s penchant for imitating foreign architecture, I thought I’d end with something like “Not to be left behind, South Korea has its own German village.” But when I looked into the history of that town, I realized it deserved more attention, so . . . here it is: 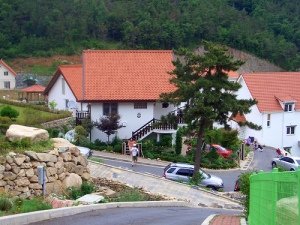 In the early 1960s, South Korea’s economy was in shambles. Unemployment was high, and per capita annual income was low (only US$87 in 1961). In order to help the desperate situation, in 1962, the government began sending its citizens to work in West Germany. This continued until 1973, when West Germany stopped accepting gastarbeiters, or guest workers. Over that time, more than 8,000 miners and 13,000 nurses made the move, sending most of the money they earned back to family in South Korea. In all, they contributed US$50 million to the Korean economy, and in exchange for the influx of needed workers, West Germany gave South Korea credit at reduced rates.

When President Park Chung-Hee visited West Germany in 1964, he met with about 300 Korean miners and nurses. According to an article in The Chosun Ilbo, Park told the group,

Let’s work for the honor of our country. Even if we can’t achieve it during our lifetime, let’s work hard for the sake of our children so that they can live in prosperity like everyone else.

The president’s speech ended when he choked up with emotion, and the final strains of the Korean national anthem were nearly drowned out by all of the crying.

Years later, South Korea showed its appreciation for the sacrifice of those who went to Germany by inviting them and their families back to take advantage of discounted plots of land. Namhae County, in 2002, even founded Dogil Maeul, or German Village, on a mountainside overlooking the ocean. The community is open to those returnees who spent at least 20 years in Germany and who want to build a subsidized house following a prescribed German style.

Buim Ulmer, from South Korea, and her German husband, Ulrich, moved to German Village in 2006. She told Spiegel Online last year that she came back because she “didn’t want to take [her] homesickness to the grave.” But she still doesn’t feel completely comfortable in Korea. For instance, her Korean, she says, is the Korean from “40 years ago.” And while Ulrich says, “My home is where my wife is,” Buim disagrees: “We have no home, there is always something missing.”

In the Engelfried family, too, the German husband seems more content living in South Korea than his Korean wife. Wilhelm Engelfried has lived in German Village for more than 10 years. “It would hurt me to leave here,” he tells Spiegel Online, but his wife, concerned about issues such as healthcare, wants to move back to Germany: “What should I do here if he gets sick? How should I take care of him?”

In a 2005 New York Times article, former miner Bai Jung-Il says, “I left when I was 26; I’m now 65. I’m more accustomed to the customs in Germany and the people there. When I come here, I feel I’ve come to a foreign country.” During his time in Germany, Bai became a home builder, and back in South Korea, he refused to follow the home designs provided by Namhae County. “The other houses here are German on the outside but on the inside they’re Korean,” he said. “Only my house will be German on the inside and outside.”

Take a look at this trailer for a documentary by Cho Sung-Hyung on German Village. The film is titled Endstation der Sehnsüchte, or  Home from Home:

The head of Namhae County, Ha Young-Je, told The New York Times that one problem with the village is that some residents still live in Germany and make their house in Korea a holiday home, traveling back to Europe every nine months to retain their citizenship there.

At the time the article was written, Namhae County was making plans for an American town for returning Korean-American retirees. One difference from its German counterpart is that people who move there would need to give up their foreign citizenship, said Ha, requiring them to live in South Korea full-time.

Since then, American Village has been completed, and you can see photos of it at the blog Daniel’s Rants. (I particularly like the entryway sporting a miniature Statue of Liberty.)

And for Korean Americans looking for a more urban experience to return to, there’s Korean American Village, scheduled to be built in the Songdo International Business District. The Korea Economic Daily reports that the finished multi-structure high-rise project will contain over 3,000 residential units, including apartments, office-residence complexes, and residence hotels.