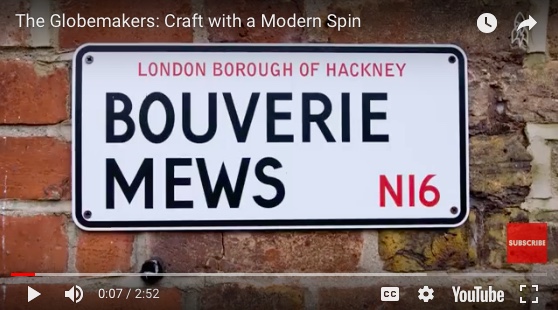 So after a long hiatus, I went back to the Bellerby and Co. Globemakers’ website (I’ve written about them here and here), and I saw they’d posted a Great Big Story video that CNN had made about them. It’s a cool video, but what really caught my attention was Bellerby’s address posted on the outside of their studio. Yes, their address:

I like the sound of it. It sounds so . . . British. But beyond that, it’s provided me a learnable moment, with help from the Online Etymology Dictionary, one of my favorite sites.

First, there’s Borough of Hackney. Hackney originally meant “Haca’s Isle” or “Hook Island,” the name for a dry patch in the middle of a marsh within the current boundaries of London. In early medieval times, horses were kept there. These horses were hired out for regular things like riding and pulling, not for specialized purposes, and the horses themselves came to be called “hackneys.” That led to the shortened form hack, which is now used for someone, such as a writer or artist, who does dull or routine work for pay. In the past, hackney was also a verb, meaning “to use a horse for riding,” which gave us our current adjective hackneyed, for something that is overused or trite.

Then there’s Mews. Turns out that has nothing to do with cats but a lot to do with horses. Mew used to mean “cage,” and the king’s hawks were kept at the mews at London’s Charing Cross. The site later became the home for the royal horse stables, called the Royal Mews. By the early 1800s, mews meant “a street of stables converted into homes for people.”

Finally, a blog post by Bellerby and Co. tells us that their mews (street) is named after John Bouverie, a British antiquarian and art collector, who died in 1750.

Bellerby’s blog also points out another nearby occupant of Bouverie Mews: John Nolan Studio, where they make animatronics, such as those in the commercials below. In the first one, for McVities Digestive Cookies, it’s a little hard to tell what’s real and what’s fake. It’s a little easier to make that distinction in the advert (as the Brits say) for Nolan’s Cheddar. That’s not at all because the mouse doesn’t look lifelike.

You’ll see what I mean.