Home is an elusive concept for many Third Culture Kids. Paul Richardson, who was born in Papua, Indonesia, is no exception.

“Because I lived so many places in different parts of the world, traveled so much,” he says, “I’d never been able to really say where’s home.” 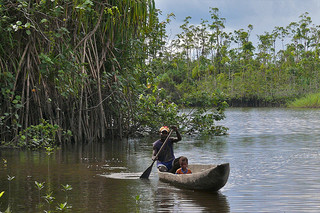 But this summer, he, along with his father and two brothers, returned to the place where he was “born and raised.” That return is the subject of the 15-minute film Never the Same: Celebrating 50 Years since Peace Child.

Paul is part of a famous family, at least among evangelical Christians and the missionary community. Don and Carol, his parents, moved to Papua in 1962 to take the gospel to the Sawi, a tribe of cannibals and headhunters. Their story is the subject of the book Peace Child: An Unforgettable Story of Primitive Jungle Treachery in the 20th Century, later made into a movie, also called Peace Child.

When missionary historian Ruth Tucker wrote From Jerusalem to Irian Jaya: A Biographical History of Christian Missions, it was the work of the Richardsons in Papua (formerly Irian Jaya) that made up the final chapter.

Ministering to a warring tribe was not easy, and at one point, Don told the Sawis that if they didn’t stop fighting, he and his family would have to leave. In order to keep the missionaries there, each Sawi village gave an infant boy to its enemies as a sign of peace. This idea of the “peace child” became a door for the message that the Richardsons were trying to tell them, that God, likewise, had given the world a peace gift, his only son.

This experience among the Sawi formed the basis for Don’s belief that every culture has a “redemptive analogy,” a story, practice, or tradition that can be used to help the people understand the gospel of Christ.  He expounds on this concept in his book Eternity in Their Hearts: Startling Evidence of Belief in the One True God in Hundreds of Cultures throughout the World.

Fifty years after first arriving in Papua, Don revisited the Sawi tribe, which had not only embraced Christianity but had become a base for reaching out to the tribes around them with the message of Christ. Making the trip with him were his sons: Steve, who was seven months old when his family moved to be with the Sawi, and Paul and Shannon, who were born in Papua.

Steve is now the president of the mission agency Pioneers-USA, and he serves as the narrator for Never the Same, which you can view below. It begins with a short overview of the Richardson’s work with the Sawi people and then shows their reunion with their old friends. This is where Paul talks about returning to the place where he lived as a child:

There’s no electricity except for a little generator, and . . . there’s no emails, there’s no text messages . . . just, you know . . . it’s just quiet here. And it’s beautiful, and . . . and there’s a connection with the people here. And, uh, just waking up in the morning, hearing the sounds of the jungle, and, I don’t know, I slept better last night than I have in years, even though I’m just sleeping on the floor in this village.

So there is something to going back. I . . . Because I lived so many places in different parts of the world, traveled so much, I’d never been able to really say where’s home. But I think this would probably be more than anywhere else . . . is where I was born and raised. So this will always be special for me.

I heard about this video from Brian Stankich at Fulfill. In response to my post on eating insects, he pointed to a scene where Steve is eating some grubs on a stick, given to him by his Sawi hosts. Showing his snack to the camera, he says,

Oh this is um . . . these are grubs. And inside they’re just full of grease, and the heads are really . . . very strange, actually, the more I think about it. But [chewing and clearing his throat] they grow on you.

[photo: “Papua-Indonesia, 2008,” by CIFOR, used under a Creative Commons license]