In Praise of Petite Feet

I remember seeing a large advertisement in the Taipei subway station showing a Western model in a swimsuit sporting a dark tan. In the US, a photo of a lady with that kind of complexion might be promoting a tanning product, but in Taiwan, it was an example of what you don’t want to look like. Instead, the ad was for a skin whitener. Beauty really is in the eye of the beholder. But recent research has finally shown us a female trait that everyone around the globe agrees is attractive: little feet.

According to a team led by Daniel M.T. Fessler, six studies confirm that “small foot size is preferred when judging women.” In one study, when aske 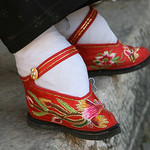 d to pick the most attractive women, males and females from eight countries chose the ladies with the smallest feet. That’s because everywhere in the world, small feet represent “youth and femininity, and thus desirability.” . . . Um, well, not everywhere. Seems there is one group of people who disagree. They are the Karo Batak of rural Indonesia, hard workers who often don’t wear shoes. They prefer women with large feet, which are associated with strength and a better ability to work in the fields.

The research was presented in the journal Evolution & Human Behavior, 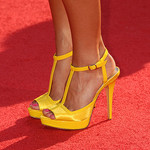 under the title “Testing a Postulated Case of Intersexual Selection in Humans: The Role of Foot Size in Judgments of Physical Attractiveness and Age” (abstract here). (I’m thinking a lot of cultural anthropologists and their ilk have a preference for long titles.)

Evolution and human behavior. Now those are a couple topics that can cause some disagreement around the world. An article published in Science in 2006 reported on studies showing that adults in the US, when compared to people in 32 Europe countries and Japan, are much less likely to accept “the evolution of humans from earlier forms of life.” Back then, only 14% of adults in the US believed evolution to be “true,” while about one third said it was “false.” The only country in the study with a lower opinion of evolution was Turkey. On the opposite extreme of the spectrum was Iceland, where over 80% of adults believed in evolution.

You are currently reading In Praise of Petite Feet at Clearing Customs.