Here are a couple related lists. The first one is under the heading “How Learning a New Language Makes You Smarter“:

– The interference caused by having two languages in your head “forces the brain to resolve internal conflict, giving the mind a workout that strengthens its cognitive muscles.”
– Bilingualism improves the brain’s “executive function,” including the ability to focus on more important things while ignoring what else might get in the way.
– The need, and ability, to switch languages develops the ability to better “monitor the environment,” or track changes in one’s surroundings more efficiently.
– Infants raised in a bilingual setting show increased cognitive skills over those raised with one language, even before they learn to speak.
– High-level bilingual skills in elderly adults correlate with a higher resistance to dementia.

And now, under the heading “Learning What New Language Will Make You Feel Dumber?“

According to the United States Department of State’s Foreign Service Institute, the hardest languages for English speakers to learn are 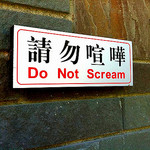 These are in no particular order, but the FSI believes Japanese to be the hardest of all.

Published by the National Virtual Translation Center, the complete list of 63 languages includes their estimated learning times. It is no longer available at NVTC, but you can see a copy from October 2007 at The Internet Archive Wayback Machine.