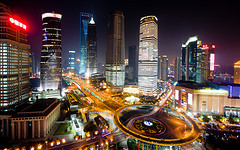 I just saw a trailer for a new movie coming out. The movie’s called Shanghai Calling, and it’s about an American-born Chinese who is sent “back” to China by his boss. It’s a fish-out-of-water story, with the extra twist that this fish feels more out of place because he looks like he belongs.

When our kids attended a mission school in Taipei, they often had visitors come to talk about Third Culture Kid issues. One year, we were honored to hear from David Pollock, one of the authors of Third Culture Kids: Growing Up among Worlds. He said that, often, the people who have the hardest time fitting in to a new culture are those who look like they should fit in. So in China, an obvious foreigner will get praised for knowing a few Chinese words, while an outsider who looks Chinese may get scolded for not knowing “his own” language and culture.

Here’s the trailer. It’s pretty funny. Reminds my family of some of our experiences, like when the lead character shows an address to a taxi driver and it ends up being only half a block away. The complete film hasn’t been rated yet, so I can’t speak for whether or not it’s family friendly. Here’s hoping it is.

And it sounds like it’s getting a good reception in China from expats and nationals alike. Here’s what Daniel Hsia, the director, wrote in his blog (dated March 23) about preview screenings of Shanghai Calling in Beijing and Shanghai:

Fortunately, the audience loved the film.  After the screenings, American viewers thanked us for making a movie that could finally explain to their friends and families back home the strangeness of their daily lives in China.  Chinese viewers told us how refreshing it was to see a movie about modern China, and not just another ancient martial arts epic.  And both groups were surprised at how funny the movie was.  I guess most expats don’t necessarily see their lives as inherently comedic.

[photo: “Shanghai by Night,” by Sjekster, used under a Creative Commons license]