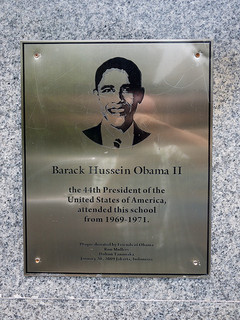 A new biography is out on the president, David Maraniss’s Barack Obama: The Story, and it’s getting some media attention, mostly because of the input from former girlfriends and because parts seem to contradict Obama’s own earlier writings. But what interests me more are the insights on how the president’s international upbringing has been a factor in shaping his personality.

As Obama grew up, he was exposed to a variety of different cultures. He was born in Hawaii to a Kenyan father and a white American mother from Kansas, and after his parents divorced, his mother married an Indonesian man. The family later moved to Jakarta, where Obama lived from 6 to 10 years old, before returning to Hawaii, finishing out his elementary and secondary schooling there.

In adaptations from the book, published in Vanity Fair this month, Maraniss writes,

At age 20, Obama was a man of the world. He had never been to south-central Kansas or western Kenya, the homelands of his ancestors, yet his divided heritage from Africa and the American heartland had defined him from the beginning. He could not be of one place, rooted and provincial. From his years living in Indonesia, where he was fully immersed in Javanese schools and culture; from his adolescence in Hawaii, where he was in the polyglot sea of hapa and haole, Asians and islanders; from his mother’s long-term commitment to development work overseas; from his friendship with Pakistani students at Occidental and his extended visit to their country—from all of these he had experienced far more global diversity than the average college junior. He knew the ways of different cultures better than he knew himself.

In 1979, Obama began his post-secondary education at Occidental College, in Los Angeles. Then, after transferring to Columbia University two years later, he reconnected with Alex McNear, a friend from Occidental, who was spending the summer in New York. Obama wrote her that he envied his friends who were heading into business and other mainstream pursuits, but that didn’t feel right for him:

Caught without a class, a structure or tradition to support me, in a sense the choice to take a different path is made for me. The only way to assuage my feelings of isolation are to absorb all the traditions [and] classes; make them mine, me theirs.

Obama first met a later girlfriend, Genevieve Cook, in 1983 at a Christmas party. In one of those TCK “me too!” moments, they discovered that both had spent time in Jakarta as children. Maraniss writes,

He noticed her accent. Australian, she said. He knew many Aussies, friends of his mother’s, because he had lived in Indonesia when he was a boy. So had she, before her parents divorced, and again briefly in high school. As it turned out, their stays in Jakarta had overlapped for a few years, starting in 1967. They talked nonstop, moving from one subject to another, sharing an intense and immediate affinity, enthralled by the randomness of their meeting and how much they had in common. They had lived many places but never felt at home.

John Richardson, himself a TCK who grew up in Asia, believes that Obama’s time overseas has had a big impact on shaping his personality and how he goes about solving problems. What some—from both the right and left—see as Obama’s frustrating bipartisanship, writes Richardson, isn’t “exactly bipartisanship. It’s something else—something strange and essential. It is, though we don’t quite realize it yet, the real reason we elected him.”

Some, fellow TCKs and non TCKs alike, would argue that this form of bipartisanship is what kept them from voting for him. It’s not my purpose here to argue politics or the rightness or wrongness of Obama’s views or “the real reason we elected him.” Rather, I want to look at how his TCKness affects him. When TCKs meet each other, they soon find out that while their common experiences have often produced shared attitudes, that does not mean that they share the same beliefs and convictions. Some TCKs passionately defend Obama’s policies while others passionately attack them. Being a Third Culture Kid certainly doesn’t produce cookie-cutter people, political or otherwise.

Richardson goes on to quote from what he calls “the TCK bible,” David C. Pollock and Ruth E. Van Reken’s Third Culture Kids: The Experience of Growing Up among Worlds:

While growing up in a multiplicity of countries and cultures, TCKs not only observe firsthand the many geographical differences around the world but they also learn how people view life from different philosophical and political perspectives. . . . [TCKs] have lived in other places long enough to appreciate the reasons and understanding behind some of the behavioral differences rather than simply being frustrated by them as visitors tend to be.

But, writes Richardson, when TCKs arrive in the US, their disconnect with American culture makes those around them wonder if there is a disconnect in values, too. He goes back to Third Culture Kids:

It seems the very awareness which helps TCKs view a situation from multiple perspectives can also make TCKs seem impatient or arrogant with others who only see things from their own perspective—particularly people from their home culture . . . others may notice how the TCK’s behavior changes in various circumstances and begin to wonder if they can trust anything the TCK does or says. It looks to them as if he or she has no real convictions about much of anything.

According to Van Reken, TCKs often call themselves “chameleons” because “after spending a little time observing what is going on, they can easily switch language, style of relating, appearance, and cultural practices to take on the characteristics needed to blend better into the current scene.” She quotes an article in the Financial Times that states President Obama “benefited from his chameleon power to make a lot of different people feel he represents them. . . .”

Shortly after Obama’s election, Van Reken wrote for The Daily Beast that the new president and the other adult TCKs that he appointed to his cabinet “share certain emotional and psychological traits that may exert great influence in the new administration.” To Van Reken, Obama’s Dreams of My Father “could serve as a textbook in the TCK syllabus, a classic search for self-definition, described in living color,” and she calls Obama’s “exceptional skill at mediating among competing arguments,” his seeming aloofness, and his “cool manner” as common traits of Third Culture Kids.

Aloofness is one of the descriptors that President Obama’s critics use to tag him. It is similar to some of the ways his girlfriend, Cook, also describes him in her diary: “something also there of smoothed veneer, of guardedness . . . but I’m still left with this feeling of . . . a bit of a wall—the veil,” “Distance, distance, distance, and wariness,” “that coolness,” and “his withheld-ness.”

During his relationship with Cook, when the two went to social functions, it was usually with Pakistani friends. But there came a time when Obama began to draw away from them, which Beenu Mahmood, one of those friends, noticed. Maraniss writes that Mahmood

could see Obama slowly but carefully distancing himself as a necessary step in establishing his political identity as an American. For years when Barack was around [the Pakistanis], he seemed to share their attitudes as sophisticated outsiders who looked at politics from an international perspective. He was one of them, in that sense. But to get to where he wanted to go he had to change.

Where am I from? Where am I going? These are questions that are sometimes difficult for Third Culture Kids to answer. But for at least one TCK, the answer to the second question ended up being the White House.