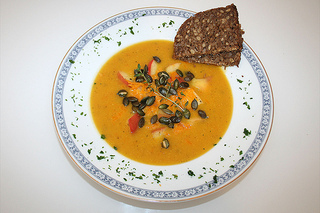 Back when I was a kid, waaaaay back before self-serve soda dispensers, we used to ask our friends behind the counter for an “Around the World.” That meant we wanted a little bit of every flavor in one cup. Can’t say that it tasted so great, but it was fun. I see that others call it a “Suicide” or “Swamp Water.” As I said, it wasn’t the flavor that made us order it.

This past weekend, my family and I were at a Burger King that had a “Coca-Cola freestyle,” serving over 100 flavors of drinks out of one machine. It’s just one example of how our kids’ globe is shrinking. My Around the World recipe had only about six ingredients. Now there’s a lot more “world” available for them to go “around.”

So much for my intro. What I’m really looking at in this post are other kinds of recipes—ones that don’t make an Around the World, but ones that come from around the world. Want to cook up some piri-piri sauce, vartabit, or bun ho? Here are some recipe sites I’ve found that will show you how, and take you on a world tour along the way. (Each of these sites is searchable by ingredient, recipe name, or country, and a couple have background information on each region and its food.)

And in honor of the tradition that’s become a part of this time of the year—putting pumpkin flavor in just about everything that’s edible—here are some pumpkin recipes, one from each site:

Who knows, maybe Coca-Cola will take a cue from Maine Root Handcrafted Beverages and add another soda flavor to their drink machine: Pumpkin Pie.

4 thoughts on “Cooking Up a Trip “Around the World””