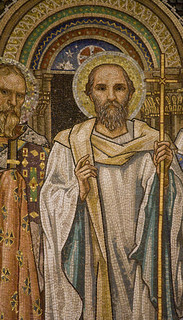 At times, Paul stressed his independence. In his letter to the Galatian churches, he affirmed that his role as an apostle came directly from Jesus, not from his association with the other apostles:

But when the one who set me apart from birth and called me by his grace was pleased to reveal his Son in me so that I could preach him among the Gentiles, I did not go to ask advice from any human being, nor did I go up to Jerusalem to see those who were apostles before me, but right away I departed to Arabia, and then returned to Damascus.

But Paul wasn’t a loner. He took partners with him on his missionary trips, and he looked to others for encouragement and comfort . . . for member care.

When Paul finally met with the apostles in Jerusalem, Barnabas helped him by being his advocate, vouching for his dedication to Jesus. Later, Barnabas sought out Paul for his help in working with the church in Antioch, and the two were sent out by the church on Paul’s first missionary journey. It was during his trips (three are recorded in the book of Acts) and while he was a prisoner that Paul wrote his New Testament letters, often mentioning those who served to encourage him.

Near the end of his first letter to the church in Corinth, he wrote about “the household of Stephanus” (or Stephanas), who “devoted themselves to ministry for the saints,” and added,

I was glad about the arrival of Stephanus, Fortunatus, and Achaicus because they have supplied the fellowship with you that I lacked. For they refreshed my spirit and yours. So then, recognize people like this.

In his second letter to the Corinthians, Paul told about how he turned away from a God-given ministry opportunity because he needed to hear from Titus:

Now when I arrived in Troas to proclaim the gospel of Christ, even though the Lord had opened a door of opportunity for me, I had no relief in my spirit, because I did not find my brother Titus there. So I said good-bye to them and set out for Macedonia.

our body had no rest at all, but we were troubled in every way—struggles from the outside, fears from within. But God, who encourages the downhearted, encouraged us by the arrival of Titus. We were encouraged not only by his arrival, but also by the encouragement you gave him, as he reported to us your longing, your mourning, your deep concern for me, so that I rejoiced more than ever.

While under house arrest in Rome, Paul wrote to Philemon, “I have had great joy and encouragement because of your love, for the hearts of the saints have been refreshed through you, brother.” But Paul  had an issue he wanted to address, as well. Onesimus, Philemon’s slave, had run away, had come to Paul, and had become a Christian. Paul was sending him back to Philemon, not as a slave but as a brother in Christ, even though Paul wrote, “I wanted to keep him so that he could serve me in your place during my imprisonment for the sake of the gospel.” Paul also looked forward to spending time with Philemon in the future, telling him to “prepare a place for me to stay, for I hope that through your prayers I will be given back to you.”

Still a prisoner, Paul wrote to the Colossians and the Philippians. He told those in Colossae that Aristarchus, Mark, and Jesus (called Justus) were the only Jewish Christians still working with him, saying “they have been a comfort to me.” And to the Christians in Philippi, he told of his plans to send to them Epaphroditus, whom he described as

my brother, coworker and fellow soldier, and your messenger and minister to me in my need. Indeed, he greatly missed all of you and was distressed because you heard that he had been ill. In fact he became so ill that he nearly died. But God showed mercy to him—and not to him only, but also to me—so that I would not have grief on top of grief. Therefore I am all the more eager to send him, so that when you see him again you can rejoice and I can be free from anxiety. So welcome him in the Lord with great joy, and honor people like him, since it was because of the work of Christ that he almost died. He risked his life so that he could make up for your inability to serve me.

Later, imprisoned in a Roman dungeon, Paul wrote his second letter to Timothy, saying, “As I remember your tears, I long to see you, so that I may be filled with joy,” and then,

May the Lord grant mercy to the family of Onesiphorus, because he often refreshed me and was not ashamed of my imprisonment. But when he arrived in Rome, he eagerly searched for me and found me. May the Lord grant him to find mercy from the Lord on that day! And you know very well all the ways he served me in Ephesus.

Alone, except for Luke, Paul told Timothy, “Make every effort to come to me soon,” requesting that he also bring Mark, because “he is a great help to me in ministry.” Paul even mentions some items that he needs (a care package?), asking Timothy to bring along a cloak that Paul had left in Troas, as well as his scrolls.

And if Paul needed it, so do today’s missionaries, every one.

(Scripture quoted by permission. All scripture quotations are taken from the NET Bible® copyright ©1996-2006 by Biblical Studies Press, L.L.C. www.bible.org. All rights reserved. This material is available in its entirety as a free download or online web use at http://netbible.org/.)