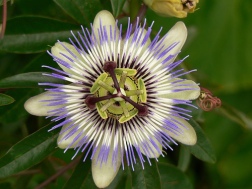 The passion fruit, with its leathery skin, slimy seeds, and great flavor, has always been something exotic (strange?) to me. I used to think that it got its name because people thought that eating it would produce passionate feelings. Wrong kind of passion. I now know that the name comes from the “passion,” or the suffering, of Christ.

When Spanish Jesuit missionaries found the plant in South America, they called it the “passion flower” because they saw in its bloom symbols of Jesus’ crucifixion. Specifically:

But that’s not all I’ve learned. I lately found out the origin of the name for birds of paradise. Again, I figured they were called that because of their exotic beauty—that would be found in a tropical paradise. Wrong again. 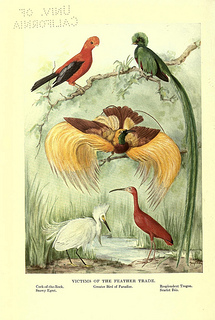 An article in a 1906 issue of Birds and Nature (the “only magazine in the world illustrated by color photography”) states that European traders first discovered birds of paradise when they visited islands in southeast Asia—some 300 years earlier—looking for spices. Some natives gave the explorers the dried skins of  birds with beautiful plumage. The locals called the birds “God’s Birds,” and when they killed them, they cut off the legs and feet, burying them under the tree where the birds came from as an offering to heaven.

The dried bodies of the birds were exported as time went on, and as the people of Europe had never seen one alive, but always the skin without legs and feet, they came to consider them as heavenly birds, indeed, formed to float in the air as they dwelt in the Garden of Eden, resting occasionally by suspending themselves from the branches of trees by the feathers of their tails, and feeding on air, or the soft dews of heaven. Hence they called [them] the Birds of Paradise.

Those Europeans with their creativity and imaginations.

So what’s in a name? Obviously, a lot more than I thought.

One thought on “Passion Fruit and Birds of Paradise, What’s in a Name?”