A few days ago I was the only one in the house at lunch time and I couldn’t find the peanut butter to make a peanut-butter-and-jelly sandwich.

No peanut butter? Why, it seemed downright un-American. And not only that, but it was nothing less than a betrayal of my upbringing.

PB&Js are so fundamental to our formative years that, according to the National Peanut Board, the average American will eat 1,500 before graduating from high school.

Peanut butter is part of what makes America America. Even those from outside our borders know it’s so.

While it’s not nearly so popular around the world, once people arrive in the US, they are pulled in by the gooey spread. After giving us another quotation from Krampner—“immigrant kids tend to take to it as a part of their Americanization process”—Martinez-Carter tells of her own experiences:

My father is a first-generation Mexican immigrant and my sister adopted from China, and our cupboard reliably contained a jar of peanut butter we dug into daily. Much like how my sister’s English as a Second Language class teacher screened the classic Disney movies for her kindergarten students to catch them up on cultural references, developing a taste for peanut butter is a component of the acculturation process in the U.S. It is sustenance for understanding America.

Peanuts have their own story to tell about immigrating to America. According to the National Peanut Board, Europeans first came across peanuts while exploring Brazil. Later, Spanish explorers brought peanuts back home from their excursions into the “new world.” From Spain, they were introduced to Asia and Africa. And finally, in the 1700s, Africans brought peanuts to what is now the US.

But it wasn’t until 1884 that Canadian Marcellus Gilmore Edson received a US patent for creating a peanut paste, which he used for making a type of peanut candy. In 1895, John Harvey Kellog invented his own version of peanut butter, a year after he and his brother invented corn flakes. And peanut butter got it’s public debut at the 1904 World’s Fair in St. Louis, when C. H. Sumner sold it at his concession stand.

Now, back to my can’t-find-the-peanut-butter dilemma. I’d already spread my jelly, and I had to eat. So I did what I had to do . . . and used Nutella instead. 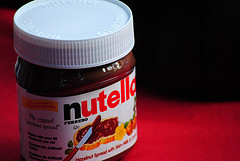 There it was, a jar of Nutella sitting where I thought the peanut butter should be. (Since we’re still unpacking from our move, there are a lot of things out of place.)

I don’t know where it had come from.

Well actually I do. It had come from all over the world.

According to the Organisation for Economic Co‑operation and Development (OECD), Nutella is such a good example of the “global value chain” that the group used the chocolate-flavored hazelnut spread as a case study for one of its policy papers.

Here’s the globality of Nutella: Ferrero, the Italian company that produces Nutella, is headquartered in Germany. The ten factories that make Nutella are located in the European Union, Russia, Turkey, North America, South America, and Australia. As for the ingredients, a list with their origins includes

Put it all together and you have a product that’s sold in 75 countries. OECD even made a map to show Nutella’s main suppliers, factories, and main sales offices.

Invented by Pietro Ferrero in the 1940s, Nutella has become the self-proclaimed “number one spread in Europe.” And while it hasn’t yet become a major competitor to peanut butter in the US, it does have it’s devoted Stateside fans.

Take, for instance, the students of Columbia University. Last year, the Columbia Daily Spectator, the school’s newspaper, launched headlines around the country when it reported that in just the first week Nutella was added to the menu at two dining halls, students went through $5,000 worth of the spread. Dining Services said that students were consuming up to 100 pounds of Nutella daily. And by “consuming,” I mean eating it for meals and stealing jars to take home. It was what one student called “all you can eat, and all you can hide.”

If that rate held up, noted the Spectator, it would cost the dining halls $250,000 a year.

But, alas, the numbers didn’t quite hold up. Another article in the newspaper two days later reported that the first week’s Nutella demand actually cost Dining Services $2,500, not $5,000, and the amount quickly faded to $450 a week after that. But even with the revised numbers, that’s still a lot of hazelnut spread.

I guess I can see the appeal. Nutella isn’t necessarily my thing, but I’m sure I would have liked it when I was in college. My mother never let me eat chocolate frosting by the spoonful when I was growing up, but at college, with no Mom looking over my shoulder, I could have eaten all the frosting . . . uh . . . Nutella I’d wanted.

Well, my college days are now long behind me, and I have new voices in my ear (many of which sound a lot like Mom’s). I don’t think I’ll ever develop an extreme taste for Nutella. I do like a good peanut butter and jelly sandwich, though. You really are what you eat, or at least you are what you ate when you were a kid. And I sure did eat a lot of PB&J sandwiches.

PB&Js. What a strange thing, my friend from Asia once told me. She had never seen one, but she’d heard about them. Why, she asked, would Americans want a sandwich made from peanuts, butter, and jelly. Strange indeed.

3 thoughts on “Peanut Butter and Nutella: A Tale of Two Spreads”