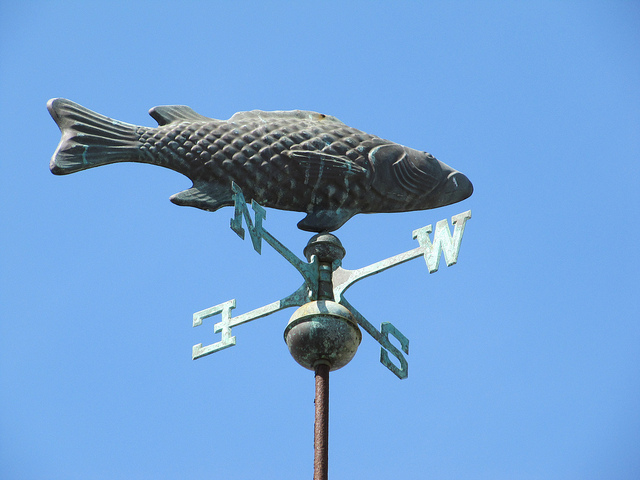 You’ve seen those images of all the fish swimming in one direction with one fish swimming agains the flow. The message: That one fish is the only one going the right way, despite the crowd.

It’s not always a lot of fun being that fish, especially when it seems as if you’re the one going in the wrong direction.

During what would become our last State-side service, I and my wife had decided that our time as missionaries would come to an end. But before making that public, I attended a missionary convention held by our fellowship of churches. I remember sitting with several thousand others in Lexington’s Rupp Arena, listening to a plenary speaker give a passionate call to the audience of potential missionaries. “Let someone else build the houses,” he said. “You follow Christ, go into ministry.”

I’d said similar things, at least to myself. I should be on the front lines. Others would fill in behind. I’d told myself I could never settle for regular work. How could I ever be satisfied living a commonplace life in the US?

And yet, here I was traveling in the opposite direction, burned up and burned out. I was leaving the mission field, not heading to it. I was stepping away, hoping someone might hire me to build that house or teach that class. . . and in time, hoping just to get hired, for just about any job.

Five years ago, David Platt, mega-church pastor and now president of the Southern Baptist Convention’s International Mission Board, wrote Radical: Taking Back Your Faith from the American Dream. I have a copy on my bookshelf, but I’ve never read it. I’ve heard good things about Platt’s book, and I’m sure it’s challenging. But it’s not the kind of challenge I’m looking for right now. The book I chose to read instead has a different kind of title. It’s The God of the Mundane: Reflections on Ordinary Life for Ordinary People.

Pastor Matt B. Redmond wrote The God of the Mundane as a response to what he had heard himself preach many times:

Change your world. Change the world of someone. Anyone. Sell everything. Sell anything. Give it away. Do something crazy. Be radical. Make people stand up and notice. Take a risk. Jesus moved from heaven to earth and gave up his life and yet you—you just go about your daily life.

But in time, his ponderings, expressed in his blog, Echoes and Stars, led him to ask if there is a God for the bulk of people who live out their lives performing mundane tasks. “Is there a God, for instance, for those who are not changing anything but diapers?”

In his book, Redmond answers the question with a “Yes,” writing to and about stay-at-home moms, dental hygienists, plumbers, children taking care of elderly parents, and bankers. In a blog post, he addresses the youth of a church where he once ministered:

Don’t be afraid of being small. Too often I probably made it sound like if you were really serious about your faith, you should think about ministry. Being a teacher or doctor or farmer was not worthy of your time. Well, that’s just stupid. Don’t be afraid to be in a “small” part of the kingdom. Be ordinary and unknown and be content. That’s more radical than anything else you will hear in the church today.

When he wrote The God of the Mundane, one of the images in Redmond’s mind was of a banker, frustrated and stuck in a job he doesn’t love. After writing his book, he left his career in ministry and became that frustrated banker.

Before reading his book, I had left my position as a missionary and had become frustrated, too. So often in Christian circles, the missionary life is considered the opposite of mundaneness. Redmond refers to it that way, too. But he doesn’t believe that a mundane life, lived in devotion to God, is unimportant.

Neither does he believe that we should stop asking people if they are “willing to give it all and go overseas as a missionary.” “It’s not a bad question to ask,” he says. “There is no question in my mind that this question needs to be out there.” But he also wants other questions asked:

When someone studying for a non-missionary career asked him his advice on selecting a missionary biography, Redmond suggested she begin by reading one about a Christian banker.

By that I meant she needed to read a book about a Christian living a mundane life. She told me she could not find one. Figures.

I would characterize Redmond as someone who is trying to be content in his present occupation, but who is not satisfied. He struggles with wanting to do something that better fits who he is, but he doesn’t want to turn his back on those like him who are not doing the BIG THING. He admits that it’s often hard for him to accept his own advice with confidence.

I find myself in the same place. I miss so much of being a missionary and still want to be a part of that work and community. And yet I don’t believe that God loved me more, valued me more then than he does now.

I still have my copy of Radical. I plan to read it someday. Someday, but not today. Today I’m reading and rereading Redmond’s book.

Maybe he’s written the closest thing you’ll find to a biography about a “Christian banker.” But rather than writing about something he’d lived, he wrote it first and now he’s living it. And as he’s been writing in his blog, it’s the living of it that has given him a real understanding of his own words.

4 thoughts on “Let’s Hear It for Mundaneness!”