Airport Chocolate: The Triangle and the Sphere 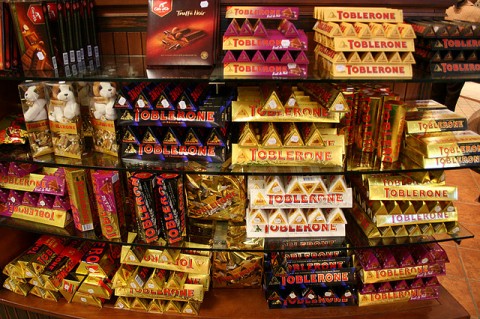 For me, they’re the airport candy: Toblerone and Ferrero Rocher. If you forgot to pick up a souvenir on your travels, you could always impress the kids with exotic chocolates from the airport. Even now that you can get them at Wal-Mart and Walgreens, to me they’re still the airport candy.

Toblerone
According to the Toblerone website, in 1900, a confectioner in Bern, Switzerland, Jean Tobler, handed his chocolate factory over to his son Theodor. Eight years later, Theodor, along with his cousin, created Toblerone, a chocolate bar made with honey and almond nougat and formed into a distinctive triangular shape. The name comes from Theodor’s family name and torrone, Italian for the type of nougat used in the bar.

Toblerone is now owned by the US company Mondelēz International, formerly Kraft Foods.

You can impress your friends by showing them the bear hidden in the picture of the mountain on the candy’s package. The bear has long been a heraldic symbol on the Bern coat of arms.

Ferrero Rocher
When it comes to chocolate, Ferrero Rocher has its own distinctive shape. Wrapped in golden foil, each candy is a small sphere made of a hazelnut, chocolaty cream, a crisp shell, and milk chocolate, sprinkled with chopped hazelnuts—in order, from the center out.

Italian confectioner Pietro Ferrero began selling chocolates in 1942, and the Ferrero company was founded four years later. But it wasn’t until 1982 that Ferrero Rocher was born. The Ferrero Group, now headquartered in Germany, has grown to become the third-largest producer of chocolate confectionaries, behind Mars and Mondelēz, and before Nestlé.

In the forty years before Ferrero Rocher was born, the Ferrero company was anything but dormant. During that time it introduced Nutella and Tic Tacs, as well as the Kinder line of candies. Kinder, of course, includes the Kinder Surprise, or Kinder Egg, an egg-shaped chocolate candy with a hollow center that contains a small toy.

While Kinder is also a staple of many airport stores, don’t make the mistake of trying to bring them into the US. If you do, and you’re caught, the candy will be confiscated, and you could get tagged with a fine. That’s because they’re considered a choking hazard and are banned in the States. U.S. Customs and Border Protection reports that in 2011 they seized more than 60,000 Kinder Eggs coming in with travelers and in international mail.

You are currently reading Airport Chocolate: The Triangle and the Sphere at Clearing Customs.