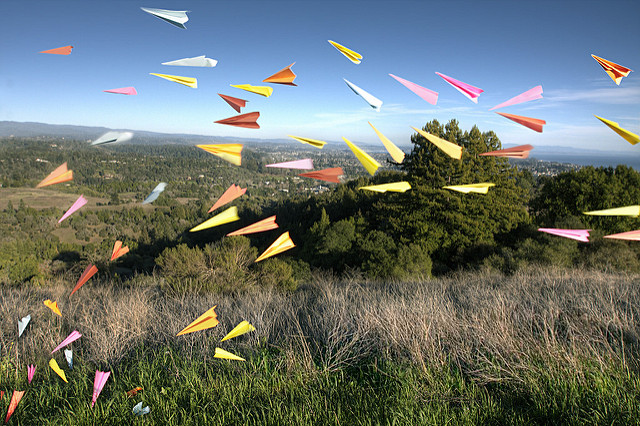 Milk: It does a body good
Beef: It’s what’s for dinner
Pork: The other white meat
Cotton: The fabric of our lives

Maybe you’ve seen the commercial of the boy chucking paper airplanes into the neighbor’s yard. It’s a cute video, about a boy’s love for his dad, serving in the military overseas. But I have to say that one of my first thoughts after watching it was “Doesn’t this family have email, or Skype?” The commercial is part of the Paper & Packaging Board’s How Life Unfolds campaign. I didn’t know that paper and cardboard were in need of an advertising push, but with lots of people promoting “think before you print,” I guess things may be getting a little tough in the paper world. And then there’s that whole email thing.

I just hope my son doesn’t watch this commercial and think that good things will happen if you toss stuff over the neighbor’s fence.

If he keeps at it, there may be a future for this boy in international competition. For several years now Red Bull has been holding a paper airplane world championship, called Red Bull Paper Wings. Last year’s contest crowned champions from Armenia (longest air time), Bulgaria (longest distance), Lebanon (aerobatics), and Hong Kong (top team).

I wonder if Paper & Packaging has thought about getting involved with some sponsorship.

And back to paper-airplane boy. . . . Here’s another story to show the emotional power of sending letters by postal mail rather than electronically. Remember Encyclopedia Brown? Years (and years) ago Donald Sobol, the boy detective’s creator, put together a book of “weird and wonderful facts.” One of the book’s entries tells us to consider

the young man in Taiwan who wrote 700 love letters to his girlfriend in the years 1974-76 trying to woo her into marriage. He succeeded. She married the postman who delivered the letters.

[photo: “fly with me,” by Max Elman, used under a Creative Commons license]