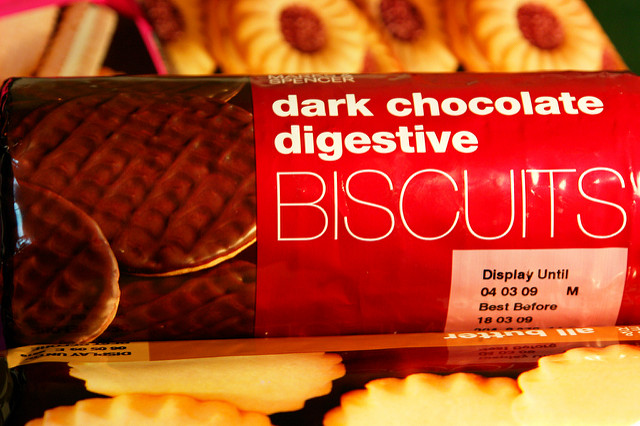 I recently listened to a TEDx talk by Scott Geller, a psychology professor at Virginia Tech, entitled “The Psychology of Self-Motivation.” In it, he recites “The Cookie Thief,” a poem by Valerie Cox.

Wait a minute. Hadn’t I heard that a-stranger-stole-my-cookies-in-an-airport story before? In fact, several years ago, as I recalled, I had seen an actor on a late-night talk show telling how the thievery had happened to him . . . but maybe it had taken place in a train station. I was unclear on the details. I also couldn’t remember which show it was on, but I was pretty sure it was a British actor, since he called the cookies “biscuits.” It’s a funny story—with a great punch line—and I’ve retold it a few times. But is it true, or too good to be true? And regardless of its truthfulness, who can lay claim to its origin?

I did a little digging, and here’s what I found (with thanks to those who’ve dug before me). . . .

First of all, the British “actor” was actually a British author: Douglas Adams, who wrote The Hitchhiker’s Guide to the Galaxy. He was a guest on Late Night with David Letterman, and videos of his appearance on the web give the show date as February 14, 1985. Adams was there to promote his novel, written in 1984, So Long, and Thanks for All the Fish, “the fourth volume in the Hitch-Hiker Trilogy.”

Letterman asked him if he used his own life experiences in his writing, which was, I’m guessing, a pre-planned question to set up what came next. Adams answered,

Yeah, well occasionally. Actually there’s one story I put in this book, which I fi— I wanted to put in print, because it’s something that happened to me a long time ago. And I’ve told the story pretty regularly now, with the result that other people are beginning to use it, so I wanted to put it in the book to say, “Hands off, guys.”

The gist of his story (minus Adams’ comedic flair) is this: At the train station, Adams buys a newspaper and package of cookies (biscuits). He puts his purchases down on a table and sits down across from a stranger. The man across from him opens the package of cookies and proceeds to eat one. Adams is perplexed, but saying nothing, eats a cookie himself. Back and forth they go, with Adams wondering how anyone could have such gall. Finally, the cookies are gone and the stranger leaves. When his train arrives, Adams picks up his newspaper to depart, and, much to his surprise, finds his unopened package of cookies lying there.

In 2001, Adams again recounted the story in a speech to Embedded Systems, saying that it had occurred in Cambridge in April of 1976. After Adams’ death in 2001, the Embedded Systems retelling was included in The Salmon of Doubt: Hitchhiking the Galaxy One Last Time, a collection of Adams’ previously unpublished works.

So Adams’ story predates Cox’s “Cookie Thief,” which was published in 1996 in A 3rd Serving of Chicken Soup for the Soul. But his rendering is still not the beginning.

Jan Harold Brunvand writes in The Choking Doberman: And Other Urban Legends that the biscuit/cookie story is one of many variations on “the unwitting-theft legend,” a general category for which he finds examples from as far back as 1912. Though the origins of Adams’ account don’t seem to be quite that old, they still precede his 1976 timeframe. Brunvand points to a letter written to the editor of the journal Folklore, in 1975. In it, A. W. Smith writes that he has seen the story in print three times, in July 1974, July 1972, and some indeterminate time earlier. The sources are, in that order, London’s Guardian, Oxfam News, and (possibly) London’s Evening Standard. Smith notes that in all these versions, the traveler is British (in Oxfam News he’s the director of Oxfam Scotland); the encounter takes place in a train station, near a train station, or in a dining car; the offending stranger is from another country, a West Indian, African, or Pakistani; and the foreigner kindly offers the Brit half of the last cookie. On the last two details, Smith asks, “Does the essence of the story concern the patient and indeed saintly character of the often despised and rejected?”

While Adams’ and Cox’s version leave out the cross-cultural aspect, Cox’s telling does include the stranger’s kind (but irritating) act of breaking the cookie in half.

Back to where we began, here’s Cox’s “Cookie Thief” in video form.

(Douglas Adams, appearance on Late Night with David Letterman, NBC, February 14, 1985; Adams, The Salmon of Doubt: Hitchhiking the Galaxy One Last Time, Del Rey, 2005; Valerie Cox, “The Cookie Thief,” A 3rd Serving of Chicken Soup for the Soul: 101 More Stories to Open the Heart and Rekindle the Spirit; Jan Harold Brunvand, The Choking Doberman: And Other Urban Legends,  Norton, 1984; A. W. Smith, “Letter to the Editor: Yet Another Modern Legend?” Folklore, vol. 86, issue 2, 1975)