Here’s another entry in the category of basketball diplomacy*. When director Till Schauder found Kevin Sheppard, a point guard from the US Virgin Islands, playing professionally in the Iranian Super League, he made him the focus of his documentary, The Iran Job. The film follows Sheppard’s season with his team, A.S. Shiraz, and his spirited interactions with the Iranian people. In particular, Sheppard forms a relationship with three women—who bravely face the cameras, remove their head coverings, and share their views about the current culture in Iran. Shauder writes:

Iran is often portrayed as a terrorist nation, a nuclear threat, and a charter member of the Axis of Evil bent on the destruction of Israel. But behind the headlines—and the aggressive rhetoric of Iran’s hard-line leaders—lies one of the most fascinating nations, as sensuous as it can be challenging, with a life-loving people. This film focuses on Iran’s people, rather than its government, and I hope it can challenge perceptions of Iran by providing an authentic perspective that may be crucial when choices are made between war and peace. It is probably safe to say that getting Iran “right” is as impossible as getting any culture “right.” Nonetheless, for their people and for ours, it should be a high priority. . . . More than a fish-out-of-water sports documentary this film focuses on social issues including women’s rights, political freedom and religious conflict, through the lens of a black American basketball player.

The Iran Job is being screened in selected US theaters, and DVDs are available at Kickstarter.

*For more examples of basketball diplomats, see my other posts on Stephon Marbury, Yao Ming, and Jeremy Lin.

[photo of a basketball goal in Varamin, Iran: “Retired hoop!” by Blake Amin Tabrizi, used under a Creative Commons license]

Jeremy Lin recently took a trip to Hong Kong and Taiwan and has pretty much mapped out a solution to the whole “hidden immigrant” problem. Lin—for those who don’t follow the NBA and 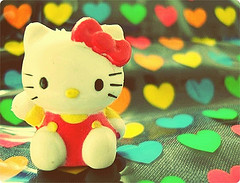 aren’t conversant about “Linsanity”— is the 24-year-old Taiwanese-American who became an overnight sensation as a point guard with the New York Knicks and who now plays for the Houston Rockets.

If you’re a cross-cultural kid who travels back to your “homeland” but finds that you don’t quite fit in, you might want to follow Lin’s lead to make things easier: First, become wildly popular in a professional sport that’s wildly popular around the globe. That way, people will know all about you before you arrive, and they won’t care about your language skills or your grasp of local culture. They’ll simply want to get your autograph and snap your photo. Next, when you realize that your celebrity makes you a prisoner in your hotel room, and you want to escape to play some streetball, borrow a giant Hello Kitty head for the perfect disguise. (At least that seemed to work with the Taipei paparazzi.)

Watch the video below to see a scripted look at Lin’s adventures in Taipei, including his airport arrival, his hotel escape, and his evening of playing basketball on public courts in the city. It was put together as a promo for an upcoming 60 Minutes segment on Lin, scheduled for this fall:

I assume 60 Minutes will delve into Lin’s cross-cultural experiences. I hope they also ask him about the role his Christian faith has played in his outlook on life. It’s a big part of his story. In fact, Lin closed out his 9-day trip to Taiwan by sharing about his beliefs at an event titled “Jeremy Lin’s Miracle Night.”

Here’s what I wrote about Lin for a newsletter back when he first came on the scene in the NBA two years ago, followed by a video from NBA.com detailing his rise to stardom:

Jeremy Shu-how Lin, a second-generation Taiwanese American has become the first person of Taiwanese descent to play in the NBA. Even though he was undrafted coming out of college, the Golden State Warriors signed him to a two-year contract before the current season began, making the 6’ 3” Lin the first Harvard graduate to join the NBA in 57 years. In 2009, Time featured Lin in an article, discussing his faith in reference to his calm demeanor in the face of racial taunts from opposing fans:

Lin’s maturity could lead him to the ministry. A devout Christian, Lin, who is an economics major, is considering becoming a pastor in a church near his Palo Alto home. “I’ve never really preached before,” Lin says. “But I’m really passionate about Christianity and helping others. There’s a beauty in seeing people change their lifestyles for the better.”

Long before there was “Lin-sanity,” there was “The Year of the Yao.” That would be Yao Ming’s rookie season with the NBA’s Houston Rockets, and the subject of the 2005 documentary of the same name. One of the players who made an appearance in the film was Stephon Marbury. Playing for the Phoenix Suns, Marbury embarrassed Yao with a crossover dribble that made Yao tangle his feet and hit the floor (at 1:09 of the trailer, here). That was a while ago, and now, both players are no longer in the NBA. Yao has retired due to injuries, and Marbury, in an ironic twist, is now playing for the Chinese Basketball Association’s Beijing Ducks. Not only is he playing, but he just led his team to win the 2012 championship.

While playing in the US, Marbury was known for his philanthropy, but he also had a reputation for being selfish and hard to get along with. In fact, Sports Illustrated once named him the “most undesirable teammate” in the NBA. But according to China’s Economic Observer, things are different in China, where Marbury’s image has only an upside. During the 2005-06 season, reporters at the Daily News called Marbury, then a member of the New York Knicks, “the most reviled athlete in New York.” But now, in 2012, the people of China call him by the respectful title zheng wei, meaning political commissar.

For his fans, not only is he a great player leading them to victory, he is also someone who never disappoints them. No matter how long the queue is, he signs every notebook handed to him. . . . He also talks with the old Chinese ladies in his neighborhood, makes Chinese tea for journalists, has learned to use chopsticks and speak Chinese, and he even takes the crowded subway.

Marbury appreciates the fan support and acknowledges the difference that his time in China has made. “China changed the direction of my life,” he said. “I gained a lot of things that I did not have before. Coming to China has been a blessing for me.”

It’s just something about the serenity and peace of the country. I can’t really explain it; you’ve got to experience it.

He even gave advice to a fellow former NBA player in China, J.R. Smith, who was facing disagreements with his team:

I spoke with J. R. and I told him to make himself completely vulnerable to love: embrace the culture. You’ve got to acclimate yourself to something different, you’ve got to grow into it—and then you get this stillness and calmness about yourself.

And what are the future plans for the political commissar?

If you’d like to see a great film about adjusting to a new culture, I recommend The Year of the Yao. Not only did the 7-foot-6-inch Houston Rockets’ center enter the US, he also stepped into the unique world of the NBA, carrying the hopes and dreams of an entire nation with him. The documentary is also a look into the life of his young translator, himself a “rookie” thrown into the mix.