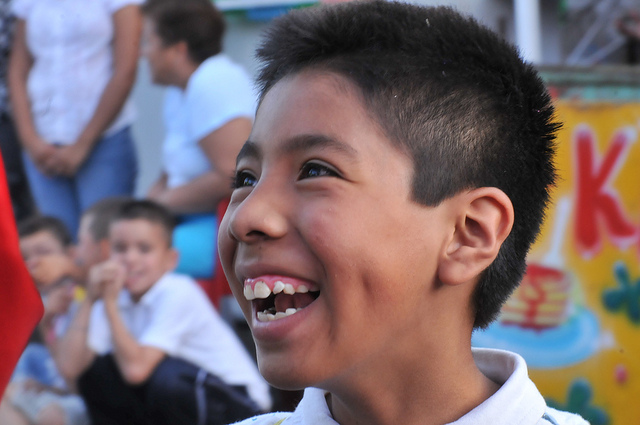 Consider this your six-month reminder: March 20 is the International Day of Happiness, and author Randy Alcorn is already telling us we should all celebrate the event, even Christians who have been taught “that God is interested in our holiness, not our happiness; that joy is the opposite of happiness; that joy isn’t an emotion.”

In fact, Alcorn, who last year wrote a book titled Happiness, tells Christianity Today this week that the church shouldn’t just acknowledge Happiness Day, we should embrace it:

Wouldn’t it be great if Bible-believing evangelical Christians were the first to put that day on the calendar and declare a day of feasting? Great food, great drink, partying, games for the kids. We could invite the community, wave the flags of various nations, welcome people from all different ethnic and national backgrounds, and just invite everyone to come eat and drink and have fun.

We don’t have to give them all a tract—though of course we can explain the Bible’s good news of happiness, that God sent his Son Jesus into the world. But it isn’t just a means to that end. You could take most of the outreach plans and programs of many evangelical churches and reach more people and give more people a favorable view of the gospel by celebrating a day like this. And then, when our kids are in their college dorms and hearing about all the stuff that can supposedly make them happy (drugs, sex, changing their worldview because Christianity is so negative and intolerant), they might remember amazingly great times of celebration alongside people of every tribe, language, worldview, and faith. That would go a long way toward dissolving the unfortunate notion that church is an unhappy place.

So, what calendar should you mark the date? Well, how about the “Happiness Is . . . 2017 Daily Calendar“? By the way, I cheated and looked ahead. March 20 says,

Happiness is . . . talking music with someone who gets it.

Alcorn talks about using the International Day of Happiness for cross-cultural outreach, and here’s a video, created by This American Life, that bridges its own cultural divide. It’s about Maggie, who is afraid to tell her “conservative Christian” parents about her 17 tattoos. She has this memory from her childhood:

I remember saying, “God wants me to be happy,” and my parents said, “No, he wants you to obey him. He doesn’t care if you’re happy.” To me God is so much more than that. There’s also grace. I think that is something that gets forgotten a lot in my family.

Turns out, their cultures aren’t as far apart as Maggie thought, and the distance between was bridged with an unexpected “ton of grace.”

[photo: “Smile,” by Sofia, used under a Creative Commons license]

What are the happiest countries in the world?

Well, that depends. It depends on how you define happiness and how you figure out if people fit your definition.

Do You Feel Good?
In 2011, the Gallup organization measured “positive emotions” by asking people in 148 countries about their previous day, asking whether they felt well-rested, were treated with respect, smiled or laughed a lot, learned or did something interesting, and experienced enjoyment. The countries with the highest percentage of respondents answering “yes” to all five questions are labeled the “most positive.” They are

Do You Not Feel Bad?
Gallup also asked people if they had experienced physical pain, worry, sadness, stress, or anger. Those answers produce the following list of places with the least negative emotions:

Are You Prosperous?
The Legatum Institute‘s Prosperity Index measures wealth and wellbeing by looking at the eight categories of economy, entrepreneurship and opportunity, governance, education, health, safety and security, personal freedom, and social capital. This gives us the following list of top-ten countries in 2012:

Are You Thriving?
To measure whether people are “thriving,” “struggling,” or “suffering,” Gallup uses the “Cantril Self-Anchoring Striving Scale.” Participants are asked to imagine a ladder, with rungs numbered 0 to 10 from bottom to top, with 0 being the worst and 10 being the best. The poll then asks two questions: “On which step of the ladder would you say you personally feel you stand at this time?” and “On which step do you think you will stand about five years from now?” Results in 2010 produce the following ranking, showing the ten countries with the highest levels of thriving people:

Deeper Analysis, Anyone?
Last year, Columbia University’s Earth Institute published the first World Happiness Report. It contains in-depth evaluations of the hows and whys of measuring happiness around the world, as well as lists based on its own examination of survey responses. One such ranking is the “Average Net Effect by Country,” which combines the averages of the positive and negative emotion results from Gallup (like those shown above). Those results give these top-10 countries:

Another ranking shown in the World Happiness Report is called the “Happy Index.” It uses information from the combined World Values Survey/European Values Survey, asking the question, “All things considered, how satisfied are you with your life as a whole these days/nowadays?” putting these countries at the top.

Or Would an Anecdotal Approach Make You Feel Better?
And finally, if all this data crunching is not your cup of tea—or if it leaves you somewhat confused—you can do what documentarian Werner Herzog did, and simply recognize happiness where you find it. Even if it’s in the most unlikely places, under the most unlikely circumstances. Even if it’s in the wilderness of Siberia.

Happy People: A Year in the Taiga (Werner Herzog and Dmitry Vasyukov, dirs., 2010)

[photo: “A Happy Man,” by Sukanto Debnath, used under a Creative Commons license]