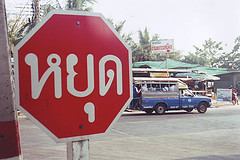 A few days ago I wrote about odd English names for dishes in Chinese menus. Most of the humor comes from what you’d assume are innocent mistranslations. But it seems there has to be another explanation for how a Thai restaurant in New Zealand got it’s unfortunate name. When Fred Bennett hired a Thai chef for his new establishment, he asked him what he should call it. The chef told him the Thai words for “Welcome and Come Again,” or at least that what he said they meant. But after that chef left sometime later and Bennett hired a new one, he found out that what the sign on his restaurant actually said was “Go Away and Don’t Come Back.” Bennett has now renamed the restaurant “Victory Thai,” and it sounds as if he has a pretty good attitude about the whole thing. “I’d like to apologise to the Thai community if I have offended them, which I’m pretty sure I would have,” he said and passes on a lesson that all cross-cultural trekkers should heed: “That’s why it pays to research.”