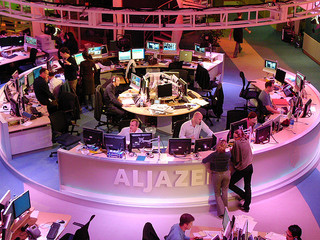 Ask Americans what Al Jazeera is, and my guess is that more than a few will assume that it must be an organization of terrorist fighters. Even among those who know that it’s a news outlet, many remember it for the videos it aired from Osama bin Laden following the 9/11 attacks and view it with suspicion.

Those are viewpoints that Al Jazeera hopes to change as it launches its cable channel, Al Jazeera America, today. Al Jazeera gained its foothold in the US market in January when it purchased Al Gore’s Current TV for around half a billion dollars.

Overcoming perceived prejudices and misconceptions, as well as accusations of bias—the organization is owned by the government of Qatar—might be an uphill battle in the US, but Al Jazeera America CEO Ehab Al Shihabi believes its winnable. He told NPR’s Sarah Abdurrahman that Al Jazeera was already rated as the “number five strongest brand in the world” in 2010. (I couldn’t find a reference to a 2010 ranking, though in 2004, Al Jazeera did place number five in Brandchannel’s Readers’ Choice Awards for brands with the most global impact, one spot behind IKEA and Starbucks and in front of Mini cars and Coca-Cola. Al Jazeera didn’t appear in the top ten in 2005 or 2006, the last years for results on Brandchannel’s website.)

The company has no plans to change the name, and Abdurrahman is confident that if viewers simply try it out, Al Jazeera America will win them over.

Ali Velshi, formerly of CNN, will host the new network’s show “Real Money.” He told NPR that he likens the appearance of Al Jazeera America to the arrival of Japanese cars to the US in the 60s and 70s. Even though Japan had recently been America’s enemy, in time, Toyota and Honda became top brands.

One way that Al Jazeera America is Americanizing its image is by hiring reporters, anchors, and other staff known for their work on familiar networks. Besides Velshi, these include Soledad O’Brien and Sheila MacVicar, from CNN; John Seigenthaler, from NBC and MSNBC;  David Shuster from Fox and MSNBC;  and Joie Chen, formerly with CNN and CBS. Kate O’Brian, former vice president of ABC News, has taken the role of president of Al Jazeera America, as well.

The new channel is also taking steps to prepare more American staffers to join its ranks, with Al Jazeera America planning to partner with Northwestern University’s Medill School of Journalism to offer internships to Medill students. Northwestern has had a campus in Qatar, awarding degrees in communications and journalism, since 2008.

So, what happens after today? Ten years from now, will Al Jazeera America have passed into history? Will it struggle to gain viewers, propped up by grants from the emir of Qatar? Or will it have taken its place as a major competitor on the cable landscape, becoming as American as baseball, hot dogs, apple pie, and . . . Toyota?

[photo: “The Nerve Centre,” by Laika slips the lead, used under a Creative Commons license]

Related Post:
Fake News: You Can Fool All of the World Some of the Time