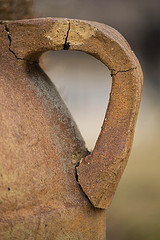 After hearing the news of Elisabeth Elliot’s death, I went back to the post I had written in 2013 about her and Steve Saint.

That led me to look for an update on Saint, as it’s been three years since he suffered a severe spinal-cord injury, leaving him an “incomplete quadriplegic.” What I found was another “next chapter” video produced last year by his Indigenous Peoples Technology and Education Center (I-TEC).

In it he talks about the value of using our suffering, our scars, to help others who are suffering in the same way. He refers specifically to Christians ministering to those who don’t know about Christ’s love, but his advice can also be applied to Christians sharing honestly with each other, not hiding the hurts they have faced, not “with makeup over all their wounds.”

People want to see Christ followers who have scars where they have wounds, so that they know that, hey, this person has been where I am, and then they trust us. So it’s time to take the makeup off, time to quit buttoning our collars up to our throats and wearing masks. People want to see that we have hurt.

I appreciate Saint’s willingness to show us how he is doing, even when he’s not doing as well as he, or the rest of us, would like. The whole of “God Doesn’t Waste Hurts” is well worth watching.

A few months before this video was posted, Saint spoke at the 2013 Global Missions Health Conference. During his presentation he fell, and used that moment as an opportunity to talk about North American missionaries. As people from the audience rushed to his aid, he said, “Wait a minute. I can do this.” And as he worked to get himself into a chair, he added,

You know, this is like missions. Whenever something happens that we don’t expect, we North Americans  always want to run in and fix it. And sometimes what we need to do is we need to just wait and give the people there a chance. . . . I can do this, I just need a chance.

You can watch his complete presentation on YouTube. It’s titled “Let God Write Your Story (But What If We Don’t Like the Next Chapter).”