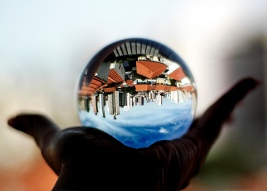 When I wrote “8 Maps and Globes That Will Change Your Perspective of the World,” I decried the lack of an upside-down globe and suggested that Bellerby & Co. Globemakers might be able to help out. Peter Bellerby read the post and commented, “An upside down globe was actually in future planning!” and added, “Pictures to come soon, just been working on finishing the design today!” Well, five months later, Mr. Bellerby, true to his word, announced in his blog “Exactly Why We Made an ‘Upside-Down Globe.’” He also included a link to an article from Al Jazeera America, “How the North Ended Up on Top of the Map.”

In this month’s issue of United Airlines’ Hemispheres Magazine, Chris Wright tells of his visit to Bellerby and Co., where he saw a bespoke upside-down globe, commissioned by a Brazilian law firm. Rotating and repositioning all the place names, says Mr. Bellerby, was “a challenge.”

Even trickier, perhaps, was coming to terms with the way the new world looks. “It’s crazy,” Bellerby says, his nose inches away from the upward-pointing Cape of Good Hope. Also, unless you approach the globe on your hands and knees, a lot of the interesting stuff is hidden away.

“There’s so much going on in the Northern Hemisphere,” says Bellerby, pointing to a barren expanse of blue. “Even the Antarctic, which is amazing, is just a lot of white.”

I had checked on Mr. Bellerby’s progress after a comment a few days ago from a reader named Lori: “I, too, have been searching for an upside-down globe! I am amazed that nobody has made one. The world is waiting for this.”

Well, Lori, the wait is over, because the upside-down globe is here, not just for a law firm in Brazil but for all of us.

Actually, though, for most of us, the wait continues. Take a look at “The Upside Down Curve,” and you’ll see that it’s an impressive—and expensive—piece of art. Even the base was “designed by the team who made the accommodation pods for the British Antarctic Survey” and is “brought to life by heritage technicians from Aston Martin.” So with its price of £14,950 ($25,000), I’ll still be waiting for quite some time . . . for the exchange rate to collapse or for a dramatic increase in my disposable income.

Mr. Bellerby tells Wright in his article, “The idea of selling a globe with a mistake is my biggest horror.” That must mean that his studio is filled with not-quite-perfect attempts at perfection. So if I could get just a small piece of a discarded upside-down gore, that would be enough for me. I would frame it and display it proudly. Oh, Mr. Bellerby, that would make the minutes go by more quickly as I anticipate a complete upheaval of the global economy or a million-dollar inheritance from the secret rich uncle I’ve never met.

When I originally wrote about an upside-down globe, I closed with the phrase, “It’s got me thinking.”

I’m still thinking. This time, I’m wondering what would happen if a typical globe and a reversed globe were placed side by side. Would the result be something like this?

(Chris Wright, “Up Is the New Down: A Master Globemaker Turns the World on Its Head,” Hemispheres, April 1, 2014)

[photo: “Untitled,” by GraceOda, used under a Creative Commons license]