Over the past 15 years, substantial changes have occurred to the landscape of international students on US university campuses.

Since statistics have been collected by IIE, starting in 1948, the number of international students has increased each year, except for 1971/72 and from 2003 to 2006. The growth for the past school year of 8.1% is the largest percentage increase since 1980/81.

The top country for sending students to the US has been China over the past 15 years, with its share of total international students growing from 11% to 31%. But the rest of the top ten has seen significant shuffling.

In 1999/2000, the number-two country was Japan. Since then, their numbers have dropped by 59%, moving them down to 7th place. India, South Korea, and Canada have each moved up one spot, landing them at 2nd, 3rd, and 5th, respectively.

Taiwan has dropped from 5th to 6th; Mexico has held steady at 9th; and Indonesia, Thailand, and Turkey have fallen out of the top ten.

Other changes over the past 15 years are

International education is crucial to building relationships between people and communities in the United States and around the world. It is through these relationships that together we can solve global challenges like climate change, the spread of pandemic disease, and combatting violent extremism. We also need to expand access to international education for students from more diverse backgrounds, in more diverse locations of study, getting more diverse types of degrees. Only by engaging multiple perspectives within our societies can we all reap the numerous benefits of international education—increased global competence, self-awareness and resiliency, and the ability to compete in the 21st century economy.

When the  Institute of International Education (IIE) releases its yearly statistics on international education, those concerning international students in the US get the most buzz. But another set of numbers, those on American students studying abroad, should get our attention, as well.

In 2011/12, over 280,000 students from the US took classes overseas. While this is an all-time high, overall only 9% of US students study abroad during their time as undergraduates.

Who are these students, and why do they study abroad while most others do not? First, I’ll talk about the who, and then I’ll move on to the why.

Who Decides to Study Abroad?

A look at the groups that make up the biggest proportions of study-abroad students gives a snapshot of who they are. Here are some of the largest percentages, along with the group in second place:

And here, for good measure, are some numbers on where and how long:

Why Do They Go, while Others Don’t?

Several factors affect students’ plans to study abroad and their follow through. As would be expected, several studies show that socio-economic status plays a large role. Mark Salisbury, et al., in his oft-referenced research, found that a student’s intention to study abroad is positively related to family income and parental education. Other qualities that have positive effects on a student’s study-abroad plans are a high interest in reading and writing, and an openness to diversity concerning ideas and people. He also found that Asian Pacific Islanders are less likely than other races to make plans to study abroad

In a doctoral dissertation at the University of Minnesota, Jinous Kasravi presents findings indicating that barriers to studying abroad include the cost of study-abroad programs and restrictions on the use of financial aid, family resistance and the restrictions of cultural norms, concerns about being able to transfer courses, and lack of parental experience traveling internationally. The main focus of Kasravi’s study was factors influencing students of color in study-abroad decisions. His findings indicate that, in spite of the obstacles, a key determining factor for non-white students is “personal internal drive and determination to have this type of overseas experience.”

A study by April Stroud further adds to the findings, showing that negative factors for studying abroad include having plans for a graduate degree, living with family while going to school, and having majors such as engineering, architecture, or medicine.” Positive factors include wanting to better understand other cultures and countries and attending a college or university over 100 miles from one’s home.

This last point, the distance school is away from home, is the topic of a recent New York Times article. It discusses whether students who attend college far away from their home are more likely to choose a more “challenging” country (say, Cambodia  vs England) as a study-abroad destination. Bruce Poch, former dean of admissions at California’s Pomona College, says that going to a challenging country requires a certain level of independence in a student, the same kind of independence that would cause a student to pick a college far from home. “And there’s still an adventuresomeness to students who choose that path,” he says, “There are just a lot of kids who don’t want to go to school with the same people they went to high school with, and they do that against a lot of pressure.”

Richard Bright is director of off-campus study at Grinnell, where most students come from out of state and 65% of juniors study abroad. “[W]e do know that most of our students are taking a flight here,” says Bright in the article. “So plenty of students are coming from distant parts of the country, and then they really go all over the world.”

Joseph Brockington is the director for the center for international programs at Kalamazoo College in Michigan. He brings the whole discussion—about choosing a country or even to go abroad at all—back to the importance of parental influence. Parents, Brockington tells The New York Times, are concerned “about whether their kids will be taken care of. So we try hard to dispel the rumors, but if Mom’s against it, it’s not going to happen.”

The number of international students at US colleges and universities is at an all-time high. Again.

In fact, that statement has been true for the past six years.

According to data from Open Doors 2013: Report on International Educational Exchange—released last month by the Institute of International Education (IIE)—819,644 students from other countries were enrolled in US institutions of higher learning in 2012/13. That represents a 7% increase over the previous academic year.

The top-five sending countries remain the same: China, India, South Korea, Saudi Arabia, and Canada. Students from China, making up 29% of international students in the US, grew their number by 21%, while those from Saudi Arabia increased by 31%. The number of students from India and South Korea fell by 4% and 2%, respectively, while Canada’s total rose by 2%.

Boost to the Economy

By far, the largest means of support for international students last year—constituting the primary source for 64% of students—was personal and family funds. This was followed by US colleges and universities (21%), foreign governments or universities (7%), and current employment (5%). Overall, more than 70% of funding came from outside the US.

US Is Top Destination

In 2011, there were 43 million international students worldwide—as reported by OECD, using data from the last available year. Based in part on OECD’s data, IIE determined that last year, 19% of all college and secondary students studying outside their country of origin were enrolled in the United States. The number-two country in this regard is the United Kingdom. Its 488,380 international students make up 11% of the global total. The next four host countries are China (8%), France (7%), Germany (6%), and Australia (6%).

While international students make up only 4% of the total enrollment in American colleges and universities, in Australia, more than one in four students (26%) come from outside the country. The UK (19%), France (12%), and Germany (11%) also have higher proportions of students from outside their borders. In China, the country sending the most students to the US, internationals make up only 1% of the total student population. 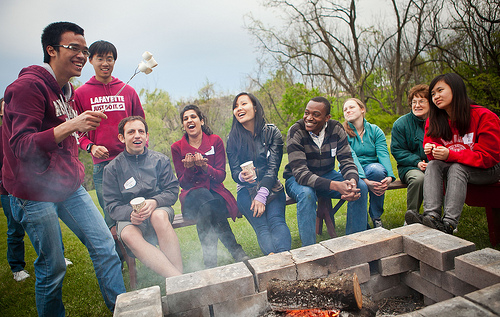 Several years ago my family and I were finishing up our Chinese New Year’s Day at a local Taipei mall. While we stood in front of a KFC and contemplated our “festive” holiday plans, taking some food home and maybe renting a movie, a Taiwanese lady walked up to us and asked in English, “Would you like to come to my home and eat a traditional Chinese New Year’s meal?”

“But our family is so large,” we said.

“Can we bring something?”

“That’s OK, we live close by, and we can come pick you up at your house.”

We accepted the invitation but protested again about all the trouble we were causing.

Her response? When she was a university student in Texas two years earlier, a family had invited her into their home, and she wanted to pass it on. (Three cheers for southern hospitality.)

Figures released today in the 2012 Open Doors Report on International Educational Exchange show that the number of international students studying at US colleges and universities during the 2011/12 school year hit an all-time high. The 764,495 students from countries outside America represents a 6% increase over the previous year.

The new data mean that the number of international students has increased for six years in a row and that over the last 10 years, the total has grown by 31%.

“International education creates strong, lasting relationships between the US and emerging leaders worldwide,” says Ann Stock, Assistant Secretary of State for Educational and Cultural Affairs. “Students return home with new perspectives and a global skill set that will allow them to build more prosperous, stable societies.”

Allan E. Goodman, president and CEO of the Institute of International Education, publisher of the annual Open Doors report, adds, “Academic and intellectual exchange fuels innovation and prepares the next generation for global citizenship. Today’s students will become future business and government leaders whose international experience will equip them to build a prosperous and more peaceful world.”

The ten schools receiving the most students were

We had a wonderful time that evening in Taipei, sharing a wonderful meal with our new friend, her mother, and her two brothers and their families. We ate our fill, and the mother gave each of our kids hong bao, the traditional gift of red envelopes with money inside.

For all of you who have shown kindness to international students (and other “outsiders”) by inviting them into your homes, we thank you. In Taiwan, we were the outsiders, but our Chinese New Year was brightened because a Texan’s kindness toward a student from Taiwan made a difference for us.

With Thanksgiving and Christmas coming up, are there international students close by you who could benefit from your kindness? You don’t have to live near one of the top-ten campuses to have internationals in your community. One of the great thing about international students in the US is that they attend all sorts of institutions of higher learning—large and small, four-year and two-year, universities and community colleges—all over the country

And by helping the students near you, you may also be helping future American students studying overseas. The number of study abroad students from the US has tripled over the past 20 years. Add to that the thousands of Americans living, working, and traveling in other countries, and that means the odds are growing that your friends or relatives will someday be outside the US, hoping for someone to show them hospitality. Maybe someone will come up to them and invite them for a meal or a cup of coffee and say, “When I was a university student in America, someone invited me.”