Don’t forget in the darkness what you have learned in the light.

I trust Phillip Yancey, who writes that Bayly said it, but I couldn’t find a specific citation and I was curious if it was original to him. Then I got a copy of Miriam Rockness’s A Blossom in the Desert: Reflections of Faith in the Art and Writings of Lilias Trotter, a collection of the missionary artist’s thoughts, paired with her watercolor paintings. This is the same Lilias Trotter whom I wrote about back in July. In the book, I found these words:

Believe in the darkness what you have seen in the light.

When I saw this, I contacted Rockness, through the blog she writes about Trotter. When I asked her about the source of the quotation, she replied,

This is one of my favorite Lilias quotes. It was taken from her diary, 10 August 1901. She was taking a “break” from the heavy load in N.A. and, after having a reunion with her brother in Zermott (Switzerland) she sought a place even higher in the mountains to “be alone with God.” And, here, as always seemed to be the case for Lilias, God “spoke to her” through His Handiwork. She writes, “‘Believe in the darkness what you have seen in the light’ – That was this mornings ‘first lesson’ – For when I opened my shutters about 5.30, there was a lovely clear happy morning sky above the grey gold rocks a[nd] glistening snow of the Weirshorn & Roth-horn. While a thick bank of white cloud lay below in the valley – Half an hour more & it had risen around us till there was nothing to be seen but a few dim ghosts of trees. Yet one knew having once seen that sky, that a radiant day was coming, & that the clouds could do nothing but melt. And me[lt] they did, the peaks glimmering like far off angels at first, & clearing till they stood out radiant & strong, with the fogs dropped down to their feet like a cast off mantle. All depended on what one had seen first.”

Elsewhere in her blog, Rockness puts the quotation in more context, describing the “heavy load” that Trotter had experienced in North Africa:

It is interesting to note that when Lilias recorded the above statement of faith in her diary, she was in the midst of an unprecedented and sustained period of challenge in ministry. After more than 3 years of political opposition  and spiritual oppression, their work had come almost to a halt. Activities in Algiers and itineration in Algeria were severely curtailed as they were dogged by the shadow of suspicion.  Even their most beloved Arab friends pulled away in fear of being identified with them.

(In this post, Rockness shows the date for Trotter’s journal entry containing the darkness/light phrase as August 16, 1901.)

In A Passion for the Impossible: The Life of Lilias Trotter, Rockness writes that the difficulties faced by Trotter included the investigation of English missionaries by the ruling French government and the targeting of young Algerian converts by sorcerers using poison and “black magic.” Also, a missionary family that had come to help in the ministry left after six months, unable to meet the demands of caring for their three children in Algeria.

Trotter writes in a journal entry from 1897,

One literally could do nothing but pray at every available bit. One might take up letters or accounts that seemed as if they were a “must be”—but one had to drop them within five minutes, almost invariably, and get to prayer—hardly prayer either, but a dumb crying up to the skies of brass.

For Trotter, during difficult times, the skies could turn to brass and clouds could obscure the sun and envelop the world around her. But she had seen the “clear happy morning sky,” and she knew that a “radiant day was coming.” It “all depended,” she writes, “on what one had seen first.”

John Ruskin, Trotter’s good friend, and artistic mentor earlier in her life, had had his own encounter with the Swiss town of Zermatt (Zermott) years before. As a young man in 1844, he captured the scene there in the watercolor below. 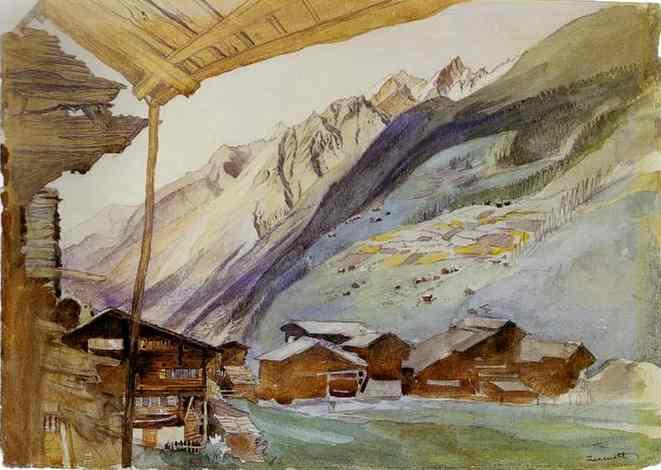 A few months ago, I came across the trailer for the documentary Many Beautiful Things and was introduced to the life of Lilias Trotter. My first thought was “What rock have I been living under to have never heard about her before?” I guess I shouldn’t feel too bad since I’m not the only one who’s been in the dark when it comes to Miss Trotter. Though she’s gained much admiration for her artistic ability and missionary endeavors, hers has certainly not become a household name in either field.

What is there to hear about? Well, Trotter’s is quite a story. Born in London in 1853, she grew up simultaneously developing her devotion to God and practicing her skills in watercolor painting. When her mother sent some of her paintings to John Ruskin, the leading art critic of the time, he recognized her talent and took her under his wing. He was so impressed with her abilities, that he said that with his help (as Trotter wrote to a friend), “she would be the greatest living painter and do things that would be Immortal.”

But in order to reach this greatness, this immortality, said Ruskin, she would need to devote herself fully to her art, as he believed that her work at the YWCA was detracting from her devotion to painting. Unwilling to give up her ministry endeavors, Trotter made her choice—serving the downtrodden women in London.

At the age of 33, she was introduced to the idea of missions in North Africa and felt God’s call to go to Algeria. Then, after being turned down by the North African Mission, she, along with two other single women, traveled to Algeria on their own. In time, she founded and led the Algiers Mission Band. Trotter’s mission work ended a full 40 years later, with her death in Algiers.

It’s quite a story, but one that without the efforts of Rockness would rarely be told. (Most of the information above comes from Rockness’s blog, where she continues to write about Trotter.)

Rockness first heard about Trotter from “two elderly sisters” who were spending the winter in Lake Wales, Florida, where Rockness lived. The sisters told the story of Trotter’s life and shared that they had a collection of devotional books that she had written. Wanting to find a good home for the books, the two ladies sent their library to Rockness over the course of several years, one volume at a time. Much traveling and investigating later, Rockness had become a Trotter expert.

Now, the story is on video with the release of Many Beautiful Things late last year—available on DVD at the movie website. The film features the voice talents of Michelle Dockery (Downton Abbey) and John Rhys-Davies (Lord of the Rings) as Trotter and Ruskin, respectively.

In an interview with Christianity Today, the film’s director, Laura Waters Hinson, tells how she was also one of those who had never heard of Trotter . . . until she got an email from Rockness. After learning more about the artist/missionary for the project, Waters Hinson understands why she has stayed so obscure:

Partly because she lived in Algeria for 40 years, until she died. A lot of her work did get smuggled back bit by bit to England by missionaries, so some of it’s preserved. But some of it was lost. The Algiers Mission Band of hers disbanded when things got politically tense in Algeria, and they pushed all the missionaries out. Even though she was a contemporary or an influence like Elisabeth Elliot and Amy Carmichael, she just didn’t gain the prominence of these other famous female missionaries. She had written books, but they didn’t catch on; she also came earlier.

While many Christians don’t know her name, many know a hymn inspired by Trotter’s writings: “Turn Your Eyes upon Jesus.” As referenced by Rockness, the prolific hymn writer Helen Howarth Lemmel—who was born in England but moved to the US at the age of 12—penned the song after reading the following passage from “Focussed,” a devotional pamphlet authored by Trotter:

Turn full your soul’s vision to Jesus and look and look at Him, and a strange dimness will come over all that is apart from Him, and the Divine “attract” by which God’s saints are made, even in this 20th century, will lay hold of you.  For “He is worthy” to have all there is to be had in the heart that He has died to win.

There are plenty of reasons for why Trotter should be famous, and there are reasons for why she has become relatively forgotten, as well. But Waters Hinson states what is probably most responsible for her lack of fame: It’s that “she was really content with full-blown obscurity.”

(The video below is of Pentatonic beatboxer, Kevin “K.O.” Olusola, playing “Turn Your Eyes upon Jesus” on the cello. Olusola was born in Kentucky to a father from Nigeria and  a mother from Grenada. He starts out on this hymn playing a fairly straightforward melody, which is impressive in its own right, but at the 1:40 mark, he really starts to get it going.)