In honor of their arrival, here’s some time-lapse footage of the earth, taken from the ISS from August to October of last year, compiled and edited—complete with inter-galactic-sounding music—by Michael König: 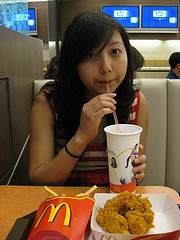 By the way, did you know that since late 2010 Burger King has been owned by a Brazilian investment firm? At the time of the purchase, for $3.26 billion, 3G Capital planned to increase BK’s international presence, including opening 500 new restaurants in Latin America by 2015.

[the photo is of a lady enjoying McDonald’s fried chicken in Thailand: “IMG_7529“ by weenie dog, used under a Creative Commons license]

It’s been ten months since an EF5 tornado hit Joplin, MO, where we live. (We moved back here in June.) The city is still recovering, but even though there’s still a long way to go, a lot of progress has been made, in large part because of the thousands of volunteers who have given time to help. It’s spring break now, and workers are coming in from all over the country. Since May 22, help has come from outside the US, as well: For instance, after the Joplin school district announced its plans to provide Joplin high schoolers with MacBooks, the United Arab Emirates decided to donate $500,000 to help pay for them—with an additional pledge of another half-million dollars in the form of matching funds for the laptop program.

And then there’s Toshiya Muto, who came to Joplin from Japan, to help in the cleanup. Muto wanted to pay back the US for what Americans did for his country after the tsunami. While in Joplin, Muto rode his bike 10 miles round trip everyday from his hotel to the disaster zone. “Of course it has an impact on my life,” said Muto, “but though my strength may be soft, slightly weak, if it has some impact, if someone needs me to exert myself, I’d like to do my best to help.”

[photo by BabyBare11, used under a Creative Commons license]