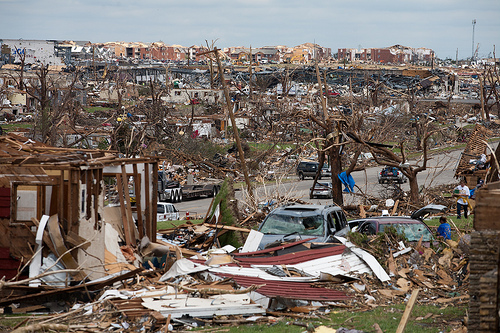 On May 22, 2011, the southwest Missouri city of Joplin made news reports around the globe when it was hit by an F5 tornado. Before moving to Taiwan, Joplin was our home for 5 years, and it became our home again when we moved back to the States one month after the storm.

On that day a coworker told us we should go to the Weather Channel’s Internet site, and we got our first look at the devastation from a distraught Mike Bettes, a Weather Channel storm chaser who arrived 10 minutes after the tornado had cut a 13-mile long, up to 3/4-mile-wide path through the city. Then we scanned CNN and several other national online news outlets. It was difficult to make sense of all the reports, largely because we were trying to convince ourselves that it couldn’t have been as bad as they reporters were saying. But while there were some inaccuracies in the initial reporting—due to the chaos and difficulties in communication—in the end, most of it was just as bad, or worse, than what we had heard. In a city of 50,000, 161 people had died, and 7,500 homes had been destroyed or damaged.

Our oldest son was back in Joplin, attending college, and we were able to get ahold of him fairly quickly by phone. At one point I might have said he was unaffected by the tornado, but we soon learned that everyone in Joplin, and in nearby communities, was affected somehow.

After we returned, we saw the immensity of the damage, but we know that that did not compare to living through it. We heard so many stories of loss, of hurt, of survival, of fear, of hope, of comfort. So many stories.

Documentary Wins Award on Other Side of the World

One of the groups telling the stories was The Joplin Globe, the city’s newspaper. Even though The Globe lost one of its staff and the homes of 25% of their employees were destroyed, they kept reporting. Their story is told in a documentary, Deadline in Disaster, produced by Orr Street Productions.

The film aired on Missouri PBS stations last year and won a 2013 Emmy in the Cultural Documentary Feature category, presented by the Mid–America Chapter of the National Academy of Television Arts & Sciences.

But that’s not the only academy that’s taken notice. Last month, the third China Academy Awards of Documentary Film (CAADF) honored Deadline in Disaster as its choice for best foreign language film. The award ceremony, held on December 29, was organized by the China Documentary Research Center and hosted by the Communication University of China.

Beth Pike and Stephen Hudnell, directed and edited the film. Pike told  The Globe that she decided to contact CAADF after the documentary was praised by two employees of China Radio International. The two, Danna Ao, a visiting scholar at the University of Missouri-Columbia’s School of Journalism, and Yinan Yan, saw it when it was screened at a Missouri Press Association conference they attended.

“They were very moved by the resiliency of the Globe staff and the people of Joplin,” Pike told the newspaper. “They could relate since China has had its share of earthquakes, with many deaths and injuries.” 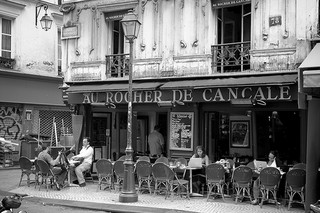 Man, I really should have studied French harder in college.

That’s how I ended my last post. Actually, I did study hard, got good grades in my three French classes, and was only three hours short of getting a French minor.

The reason I didn’t get the minor was that when I showed up for the first class of The History of the French Language, a 3-hour class taught in English, I realized I was in over my head. It was in the fall, after a summer full of not speaking French, and the girl in front of me asked Professor Honeycutt if he would teach the class in French. She asked this in French, and the girl next to her nodded in agreement. The teacher said he couldn’t do that, but I dropped the class the next day anyway.

It was one of the best decisions of my college career. I’m so glad that today I don’t have to tell people that I have a French minor but about the only thing I can still say is “I speak a little French.”

The problem wasn’t that I didn’t study hard enough. The problem was I didn’t need to use it outside of class. And inside of class, what I said didn’t matter as much as how I said it. You know what I mean: If your teacher asks you to tell about your pet, and you have a dog, but you’ve forgotten the word for dog, but you remember the word for cat, suddenly you have a cat. The professor isn’t asking you because he’s concerned about the animals in your life, he simply wants to see if you can put sentences together.

It’s not a silver bullet, but putting yourself in a place where you need to use a language in a meaningful way is key to learning a language. That’s one of the foundations of Education First, named the official supplier of language programs for the 2014 Winter Olympics in Sochi. EF was founded in 1965 by Bertil Hult in Sweden, “on the principle that cultural immersion was a superior way to study a language.”

Below are five EF commercials about people learning a language where it’s spoken. Granted, they glamorize the whole expat experience, but they are commercials, not documentaries.

I just wish that I could become fluent by watching cool videos about cool people living in cool places—and not have to worry about conjugating verbs.

The commercials are called “Live the Language.”

(By the way, who knew that speaking Australian and Canadian was so easy? Almost as easy as what they speak over in England).

(“About Us” and “EF in Brief,” Education First) 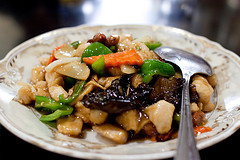 As a followup to making Beijing more foreigner-friendly for the 2008 Olympics, the Chinese government has published a book to provide restaurants with standardized English translations for over 2,000 dishes. While the publication, titled Enjoy Culinary Delights: A Chinese Menu in English, should clear up some confusion, it will diminish the entertainment value of menus in China. Gone will be “red burned lion head,” which becomes “braised pork ball in brown sauce,” and “chicken without sex life” gives way to “spring chicken.” Other substitutions include “shrimp cooked in rice wine” for “drunken shrimp,” “ground pork with green soya noodles” for “ants climbing the tree,” and “stir fried prawns and chicken” for “gambolling dragon and praying phoenix.” These last two aren’t mistranslations, just examples of poetic Chinese names whose meanings aren’t immediately obvious to foreign readers. (Maybe restaurants should just keep these literal translations and follow up with an explanation.) But others, maybe the best ones, come from a less-than-stellar grasp of English, such as the menu item from the photo in this article, which translates what could be called “sesame seaweed” as “dish of sesame oil connected through one’s female relatives.” Of course, if “seaweed” doesn’t sound good to you, the second name might be more appealing.

I don’t remember any specific examples of funny menu items from our time in Taiwan, but this topic reminds me of a couple of canned drinks that were commonly available in convenience and grocery stores. Both were labeled with unfortunate English names. The first is a sports drink from Japan, called “Pocari Sweat,” and the other is a yellow citrus soda, simply named “P.”

For anyone who’d like to learn more about the unique names of traditional Chinese dishes—and the history and makeup of Chinese characters—I highly recommend Swallowing Clouds: A Playful Journey through Chinese Culture, Language, and Cuisine, by A. Zee. Using the names of foods, the stories behind them, and the stories behind the individual characters, Zee shows how the paths of culture, language, and cuisine intertwine. It will make your mouth water, and it will make menus come to life.