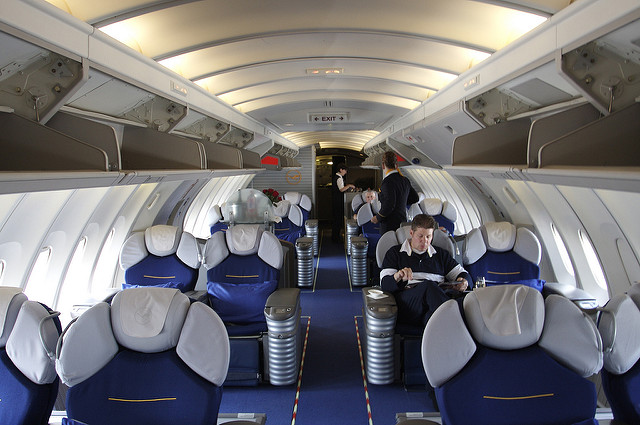 If first-class flying is beyond the reach of your bank account, Tokyo has a solution. All you need to do is contact First Airlines and book a virtual flight to Paris, Rome, New York, or Hawaii. Your trip will include authentic first-class seats from the Airbus 310 and 340; service provided by airline crew members in training who will lead you through announcements, demonstrations, and in-flight sales; engine sounds; a four-course chef-prepared meal; and a tour of your destination using a VR headset. According to CNN Travel, the cost is around $56 for a 2-hour first-class “flight.”

Real intercontinental travel usually lasts more than a couple of hours, though, so you’ll want to complete your adventure at Tokyo’s First Cabin Tsukiji. The deluxe pod hotel features small (tiny?) rooms fashioned after “premium,” “first,” and “business” class airline amenities. There’s also a “premium economy class cabin,” where the pods are stacked two high. From what I can tell, costs are about $40 plus.

A more pricey option would be to make a reservation for Air Hollywood’s Pan Am Experience in Los Angeles. It’s a five-course meal served in an “exact replica” of a Pan Am Boeing 747. A pair of tickets run from $475 to $875, but good luck making that purchase, as July’s only offering is already sold out.

Alright, I know what you’re thinking—We don’t live in Japan or LA! (unless, of course, you actually do live in Japan or LA). Well, I’m here to help. Back in 2013, I wrote a post that will set you up with some in-flight snacks, in-flight magazines, and an in-flight soundtrack. But that was pretty bare-bones. Now it’s time for an upgrade.

To create your own first-class-cabin experience, first, you’ll want to head over to ebay to purchase some used airline seats, just waiting to be bolted to your living-room floor. Or, for a bigger selection, and a bigger price tag, visit SkyArt for aircraft seats, fuselage panels, and emergency-exit doors. And if you’d like some airline trolleys (the kind that deliver your meals inflight) drop by SkyCart, where prices start at $1,500.

Next, you’ll need some in-flight blankets. According to Travel + Leisure, “Airlines Are Sick of First Class Passengers Stealing Blankets,” so don’t be doing that. Instead, visit the Westin Store online to purchase their $37 “Heavenly In-Flight Blanket,” created exclusively for Delta. For a couple of dollars more, go to the United Shop and get a Saks Fifth Avenue lap throw, used in United’s Polaris business class. United also sells duvets, amenity kits, and soap bearing their custom “United Landing scent.” For cheaper fare, Made in China offers coach-style airline blankets—for the rest of us. They’re as low as $1.30 apiece, but you’ll need to gather up a lot of friends, since you’ll need to buy at least 1,000. The same kind of bulk pricing can be found for eye masks and disposable slippers at EverythingBranded, and for amenity kits at Global Sources.

Let’s see, what are we still missing? Oh yes, in-flight meals to stock your trolleys. I thought I’d found the answer when I heard about Air Food One, where you can subscribe to a service that delivers to your door business-class-style food for about $12 meal. The menu comes from LSG Sky Chefs, who provide food for Lufthansa Airlines. I thought I’d found the answer, but, alas, no. Air Food One was only available in Germany and it’s no longer delivering meals. Ditto for Air New Zeland’s pop-up restaurant: only in London and only last year. So when it comes to food, you’ll just have to pop a frozen meal into the microwave. Or . . . you could pretend your flight is headed to outer space and treat yourself to some freeze-dried ice cream and fruit from Astronaut Foods.

So that about wraps it up, except for the buying, gathering, and assembling. If you’d like to skip all that, there is an alternative. But you’ll have to move to Austin (unless, of course, you already live in Austin), where you can purchase a home, built by a pilot, with its own in-flight media room. The walls and overhead bins are from a Boeing Qantas 767, and the seats come from a Delta L-1011 first-class cabin. The windows even have video monitors simulating flight scenes. Current asking price for the property is $2,689,600.

Oh yeah, one more thing. Regardless of how you set up your  first-class cabin, you’ll need some kind of curtain to draw a line between you and the rest of the world in coach. Might I suggest this or maybe even this?